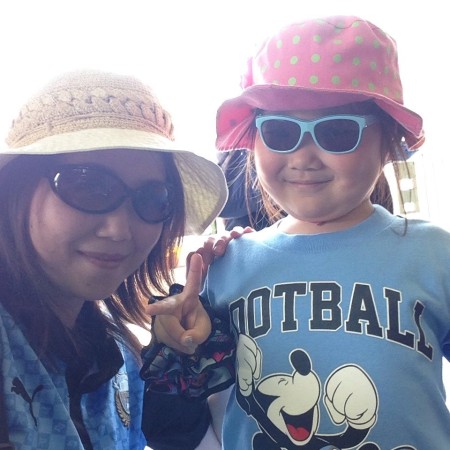 Tomomi and her daughter.

Over the years I’ve learned more and more about things my family did that I assumed all families did, even though those things are actually quite rare.

Most recently I learned (and wrote about) that I drink a glass of milk with dinner every night, largely because that’s what I did growing up. I thought that’s what everyone drank with dinner.

A few days ago I was talking to a few people about my experience with foreign exchange students. While I didn’t assume that everyone hosted students from other countries on such a regular basis as we did, I thought it was fairly commonplace. Apparently it is not.

Offhand, I can count at least 6 foreign exchange students that stayed with us for at a few months during my teenage years. I’m pretty sure there were even more.

Three of the students were from Japan, including Tomomi, who is still very connected to our family. Two were from France, including Adeline, who is still good friends with my sister, and Helen, with whom my sister was never good friends, but whom I was rather fond of. And there was Veronica from Mexico, who I remember mostly due to an incident when she went to a gas station for the first time ever and sprayed gasoline everywhere.

I think I may have always taken it for granted that we had such amazing exposure to foreign cultures through these students. It’s also a neat reminder to me of what it says about my parents that they were consistently willing to open up their home to strangers. That’s pretty cool.

Did you ever have foreign exchange students when you were growing up (or as an adult)? What do you remember about the experience?

This entry was posted on Monday, June 29th, 2015 at 10:59 pm and is filed under personal and tagged with personal. You can follow any responses to this entry through the RSS 2.0 feed.