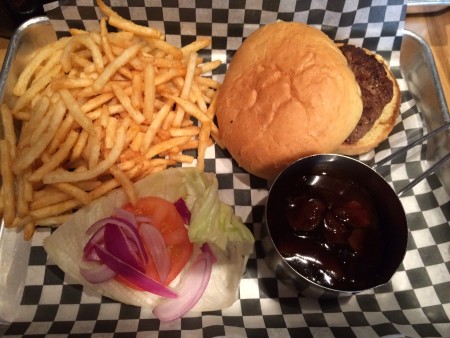 I’ve eaten a lot of odd things in my life, but up until Friday, I had never eaten kangaroo. That includes a trip to Australia 10 years ago when I ate emu and crocodile, but not kangaroo.

Then came the BBQ Saloon in St. Louis.

I recently read a review about this new restaurant that said they featured some interesting meats. I’m always looking for something unique to try, so when the review mentioned off-the-menu kangaroo burgers, I knew I wanted to try one. Especially since I hardly ever think to order off the menu. So secret and special!

Much to my surprise (and both delight and chagrin), when I arrived at the restaurant, their lunch special was kangaroo burger. It wasn’t off the menu at all, but I still got one.

I wish I had a profound story about how the meat was the best thing I ever had, and now I can jump higher and run faster. But really, it was just a solid burger. It tasted almost identical to beef. It was juicy and delicious, and I felt a little bad that I was eating a kangaroo, an animal that’s only found in zoos in the US.

In fact, the main dish to note was the chorizo dip I had as an appetizer. I’m still thinking about it. It’s expensive for an appetizer–$11–but I would get it as a meal next time. It’s that good.

Have you tried kangaroo? What’s the oddest burger you’ve ever eaten?

9 Responses to “The Kangaroo Burger”