What Should You Do If You Learn That a Surprise Is Being Planned for a Friend Who Doesn’t Like Surprises? 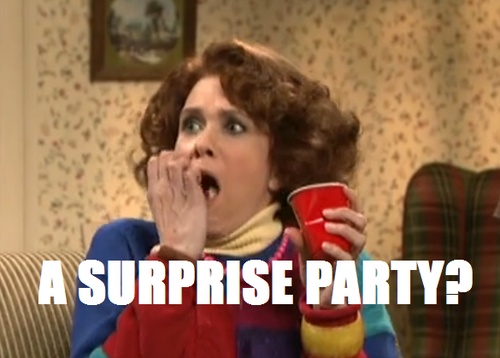 I recently learned that some very well-meaning people were planning a surprise party for a dear friend. There were a lot of layers to the surprise–not only was the party itself a surprise, but also the reason for the celebration and a few of the people in attendance.

I was only tangentially connected to the main group of people planning the party, but they invited me because they know how close friends I am with the person. So I actually received the invitation through the friend’s wife. After she explained to me what was happening, I knew I had to ask, “Do they know that he doesn’t like surprises?”

Now, to be clear, as well as I know this person, I don’t know everything about him. It’s quite possible that he likes certain types of surprises. It’s also a topic we haven’t talked about in a while, so perhaps he’s grown to like them.

But as far as I knew, he didn’t like surprises. My best guess was that he would love everything about the party, but he would be able to relax and enjoy it far more if it weren’t a structured as a surprise.

Even though my friend’s wife and I suspected that my friend would prefer to be informed about the surprise in advance, it wasn’t really our thing to spoil. We were guests at this event. We could tell that the people planning the event were super psyched about the surprise element. Seriously, people who love surprises love nothing more than surprising other people. I honestly think–despite their best intentions–they have a hard time even considering the possibility that the recipient may not like surprises.

Plus, the tricky thing about surprises is that once you spoil them, you can’t take them back. So you have to really be sure that the person would prefer the surprise to be spoiled if you’re going to do that.

I almost wish there were some sort of official surprise registry where you could go at any time to check to see if someone likes certain types of surprises but not others. For example, I like being surprised with chocolate and Slurpees. But I don’t like random people showing up at my door unannounced. I don’t like surprise parties for any occasion. And other than chocolate and Slurpees, I don’t like surprise gifts. In fact, I’d almost rather the person tell me right before they get the Slurpee so I can make sure they get the Coke flavor and not some other subpar variety.

Unfortunately, there is no such registry. So what would you do if you were in this position? You have a friend who you know doesn’t like surprises, and you learn that someone is planning a surprise party for them and they’re super excited about it. Do you:

This entry was posted on Thursday, October 8th, 2015 at 12:08 am and is filed under question of the day and tagged with debate. You can follow any responses to this entry through the RSS 2.0 feed.

5 Responses to “What Should You Do If You Learn That a Surprise Is Being Planned for a Friend Who Doesn’t Like Surprises?”