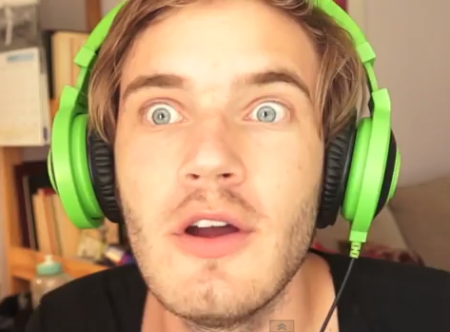 A few weeks ago I was telling some friends about PewDiePie, a YouTube sensation with over 40 million subscribers. I had never heard of him until watching a Southpark episode last year.

When I told my friends what PewDiePie’s videos are about (they’re videos of him playing video games), they were flabbergasted that he could get so many views and make so much money from it. The best explanation I could think of on the spot was that he is very good at reacting to things. Those things just happen to be video games, but he probably could be reacting to something else instead and people would still be entertained.

Whether or not that’s true, I read a really interesting article today about the linguistics of “YouTube voice.” Apparently there are a lot of similarities in the ways that many of the most popular YouTube celebrities pronounce words and their speech patterns. For example:

The article points out that these aren’t unique to YouTubers, but they are at least consistent among them. I found that interesting–it’s not just the type of content, the quality of lighting/sound, the editing, or what the person looks like that draws in viewers–it’s the way they talk. There must be something about it that hooks us and keeps our attention. I might have to try some of those methods on my channel.

I should also say that there are two things that all of these YouTubers do that surprise me:

Have you noticed any of these things about YouTube celebrities? Which of them engage you and why, and which of them don’t?

This entry was posted on Sunday, December 13th, 2015 at 10:31 pm and is filed under behavioral economics and tagged with ideas. You can follow any responses to this entry through the RSS 2.0 feed.