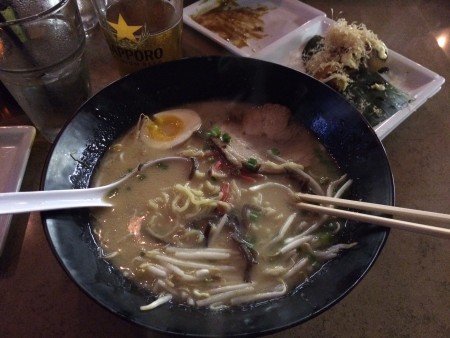 On Friday night, I traveled thousands of miles in less than a second. No drugs were involved.

A few days before that, I happened to drive past a new, unfamiliar restaurant called Robata in Maplewood, Missouri. The sign out front advertised sushi, ramen, and yakitori.

Ramen? What’s this? When I studied abroad in Japan, ramen was a regular staple of mine. I went to Tonryuu and Ippudou in Kyoto at least once a week each, patiently waiting in line for up to 30 minutes each time for a meal that lasted that long at most.

The richness of the broth of real ramen and the freshness of the noodles cannot be compared to the instant soup that most Americans associate with the name. I think it’s for that false association that ramen restaurants have been slow to catch on in the US.

But Robata claimed to have ramen. A quick search of their menu confirmed that they were the real deal–ramen is a major feature at Robata.

So I rounded up 7 friends, 6 of whom were unfamiliar with real ramen, and herded them to Robata on Friday night. This was where I discovered the portal.

As I stepped out of the chilly evening air and into the restaurant, I was instantly transported to Japan. The salty soup smell, the tightly packed tables, the cute waitresses, the steamy windows, the sounds from the kitchen…it truly might as well have been a ramen restaurant in Japan.

I was elated by the entire experience. Just like a great ramenya in Japan, we had to wait in line for a while, and it was totally worth it. When we were seated, I ordered an Asahi beer and some takoyaki to share, and I helped my friends order. Most of us got the miso tonkotsu, a traditional pork-based broth with miso. I need to go return soon to try the soy tonkotsu, the other type of traditional broth.

It’s been 14 years since I spent an amazing year in Kyoto, and it warmed my heart to spend Friday evening transported back to that wonderful city. I’d love to return again, if not quite often–it helps that it’s only a 20-minute drive from where I live.

So this is an open invitation to anyone in St. Louis: If you want to go to Japan with me, let me know–I’d love to share the Robata experience with you. I’m not kidding.

11 Responses to “There Is a Portal to Japan Somewhere in St. Louis, and I Know Where to Find It”