For Christmas I drove from St. Louis to Virginia with my two cats, Biddy and Walter, in the car. They’ve made the drive before with me, and in general they hate it, but there are lots of interesting things for them to do once they arrive.

After I wrangled them into the car early in the morning, I thought we were off to a pretty good start. They whined for a while, but they they quieted down and found some good spots to hang out in. The back seat was pulled down so they had access to the trunk: 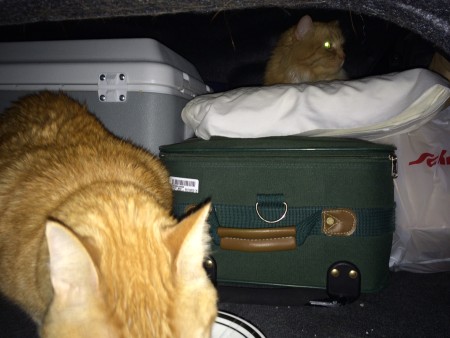 About an hour into the ride, Walter stepped up onto the center console and nuzzled against my shoulder. Aww, I thought. He’s actually enjoying this!

I pulled over at the next exit and cleaned up as much as possible, but I’ll just say that I was very thankful to have a full array of cleaning supplies to get the smell out of the car when I got back to Virginia.

I was reminded of this situation a few days ago when I watched a random video from The Late Show with Stephen Colbert. If you’re a fan of cats doing cat-like things, I highly recommend watching the video below.

The general theme of the video is that is features a performing group called The Amazing Acro-Cats, which consists of a few ladies and a bunch of cats. The cats appear to be trained to do a number of tricks in front of audiences.

However–this is the best part–most of the cats stoutly refuse to leave their cages. You can see in their eyes that they know perfectly well what they should be doing, but they simply decide not to do it. I felt bad for the ladies, but I think it must be part of the act, because they play along pretty well (as does Colbert). Here it is for your viewing pleasure:

This entry was posted on Wednesday, January 6th, 2016 at 11:30 pm and is filed under kitten and tagged with cats. You can follow any responses to this entry through the RSS 2.0 feed.

2 Responses to “Cats Be Cats”