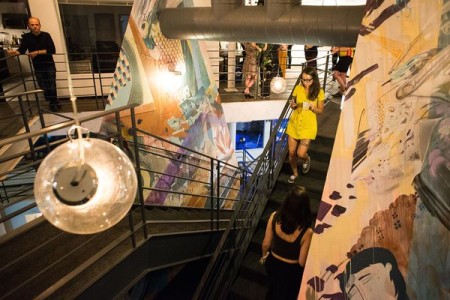 A few days ago when I read the following article--“From WeWork to WeLive: Startup moves members into its first residential building”–I bookmarked it because it seemed like a pretty novel concept. It read to met that a company was offering housing to employees, presumably to build community, reduce commutes, and blur the line between business and personal.

Unfortunately, that’s not what the article was about. It’s basically about a coworking company that is opening an apartment building using a similar business structure.

So, let’s forget what the article actually says and talk about what I thought it was going to say.

Last year, my co-founder (who works part-time for Stonemaier) was looking to move his family to a new house. An idea occurred to me: Why not try to get a condo in my building? For the most part, they would live their lives and I would live mine, but the proximity would make playtesting so much easier.

It didn’t work out, but the idea has lingered with me. Part of it is that I love working from home. It’s super convenient, and despite some of the distractions, in terms of sheer volume I’m sure I get way more work done than if I had a separate office I had to travel to.

However, it’s not a particularly conducive solution to anyone else who works at or wants to visit Stonemaier’s offices. I mean, my bedroom is right there.

So an idea I’ve pondered is if we ever grew to the point that we needed a more public office space, what if it was part office, part home? Not just for me, but for any employee?

While I enjoyed my freshman dorm experience, I picture this differently: More like apartments in a building that also has a central office. Employees could work at pretty much any time that works for them–a few hours in the morning, a few in the afternoon, and maybe a few more at night after the kids/cats go to bed. It could work for young, single folks who want to hang out with each other in their free time, but it would also give older hermits like me or family folks as much space as they need.

I think some people really value being able to draw a hard line between their work lives and their home lives, but I think part of that is based on the traditional 8-hour workday. The concept I’m describing would allow for complete flexibility of private work vs. public work vs. personal time.

I’m sure the effectiveness of this approach would vary widely based on the industry. Does it appeal to you? Would it work in your field?

This entry was posted on Tuesday, January 19th, 2016 at 10:53 pm and is filed under leadership and tagged with leadership. You can follow any responses to this entry through the RSS 2.0 feed.

8 Responses to “Would You Want to Live at Work?”