Why My Cats Knock Things Off Tables 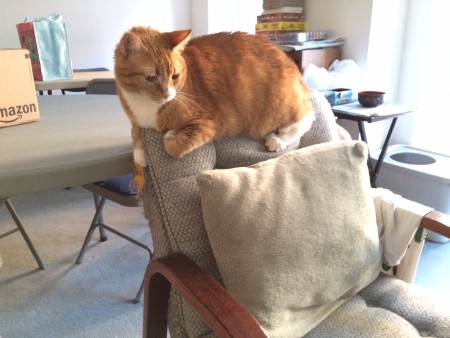 To me, it was an ordinary leaf, fluttering in the breeze as it was pinned to my balcony. To Biddy, however, it was the greatest thing ever invented.

So I let Biddy outside to capture the leaf, which he did with aplomb. He trotted back inside, clutching the leaf in his mouth, and he proceeded to toy with it for the next 30 minutes or so.

Eventually he grew tired of the leaf and left it alone. So I put it on a table for him to discover later.

Sure enough, Biddy took the bait and proceeded to do what all cats do when an object is on the edge of a table: He knocked it off. I picked it up, and he knocked it off again. And again. Every time, he’d watch it fall, observe me picking it back up, then push it back off the table.

Usually I grow tired of this game, but today I wanted to see exactly how many times Biddy would push the leaf off the table. I counted 16 times, similar to a kid who’s happy watching Frozen over and over again.

When we finished playing with the leaf, I wanted to learn exactly why cats knock things off tables. I found this answer: Cats are hunters at heart. Their instincts tell them that the object could turn out to be prey, and cats love to toy with their prey. Having the innocent leaf sit there without moving doesn’t present a challenge, but knocking it off and giving it a head start does.

I don’t know if this is a complete explanation, but it makes sense to me. I’ve seen how excited Biddy and Walter get when they hunt insects, so I can see them yearning for inanimate objects to turn into more playful prey.

Have you ever seen a cat do this? What’s your theory?

This entry was posted on Tuesday, February 2nd, 2016 at 11:05 pm and is filed under kitten and tagged with cats. You can follow any responses to this entry through the RSS 2.0 feed.

3 Responses to “Why My Cats Knock Things Off Tables”