A Stranger in Y Gelli, Part 1

A little over a year ago, I shared a short story called “Hindsight” broken up into weekly installments among the other entries on this blog. The experiment went over well, and I’d like to try it again.

This story is called “A Stranger in Y Gelli.” I wrote it a few years ago after going to a town in Wales called Hay-on-Wye, or Y Gelli in Welsh. It’s a lovely town that has more used bookstores per capita than any other place in the world.

I’ll post these installments every few days, interspersed with my regular entries. It’s a little longer than my other stories, so these entries are going to be longer then my usual blog posts. The original story was broken into 6 sections, so I’ll retain that breakdown. 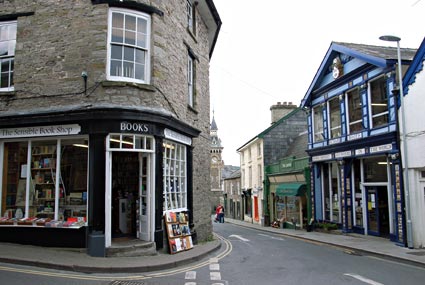 A thousand years ago, Welsh women were allowed to divorce their husbands on the grounds of impotency, leprosy, or bad breath. I know a leper when I see one, but by the time I got close enough to my husband to notice those other flaws, it was too late. I was stuck with him.

Every now and then I’ll hear him coming down the stairs, those great leather boots of his—three sizes too big—slapping against the wood. He’ll grunt at me as he passes the till and storms out the door. I avoid looking up, but I usually do anyway, just to see if there’s toilet paper stuck to those boots. Not that I’d tell him.

Then I’m granted a few minutes of peace and quiet, just me and the books and the customers. The Reed and Thistle, this is my shop. It says it on the deed: Bala Chatwin. My maiden name. I’m a Davies now, of course, but the deed still applies. Kyffin Davies may think he owns Y Gelli, but this little patch of land is mine.

Wasn’t always a bookstore, you know. Just sort of happened. In a town no bigger than a thimble on the map, we have 40 book sellers (and a multitude of book cellars). Mostly used bookstores—old books, rare books, leatherbound books with impressive clasps. It hasn’t always been this way, but as long as I can remember, books have found their way here. My little shop started out selling garden accessories. Then, little by little, books eased their way onto the shelves next to shovels and pots and sprouts in the window. Some were left here by strangers, visitors at the festival, but I’m to blame for the rest. If there’s a book about gardening or plants or even a novel with a dandelion on the cover, I had to have it in the store.

Now I spend my hours behind the till, watching foreigners and Brits leaf through my books. The locals, they come too, but they’re here for what remains of the gardening supplies. I stock what people need, nothing more. And they don’t need much.

So while my husband watches his town like a daft gargoyle in the attic, I’m down here surrounded by books. I always have one open on the counter in front of me, but I’m rarely reading. The treasure for me is watching people read, guessing if they’ll buy. I have little conversations with them in my head. You like the cover, don’t you? Feel free to judge. Don’t like that page? Flip to another. Oh, it has a photo. You like the color photos. Flip to the spine for the price. But wait, there’s nothing there. The price is a secret. You have to come to me for the price. Come ask me. Go ahead, don’t put it back. Hold it up to me. Ask it. Ask the price.

“What’s the cover on this, uh, Miller’s Guide to Nocturnal Plants?”

He grunts approvingly, tucking the book under his arm and turning back to the shelf. I applaud myself for assigning the perfect price—enough not only for him to keep the book, but also to look for others. The price is never set in stone. I invite the conversation of barter.

When the customers aren’t looking, I sometimes turn to a glossy trowel I keep in the drawer to the right of the till. If I’m looking for a specific blemish or pore on my face, I look at the convex side of the trowel. Otherwise I sneak peeks at the scooping side, which pinches my broad face into a valley of curly brown hair and freckles. Only my eyes defy the concavity. Resilient to the curvatures of light, they remain wide and green. “Cat eyes,” Dad used to call them.

Kyffin never comments on my looks. Sometimes I powder my face or thrust my chest upwards in a confining bra, just to see if he’ll take notice while eating bangers and mash in the morning. But he’s always too busy poring over historical charts and figures, trends and patterns. Always planning for the next festival.

That damn festival has been on his mind ever since Booth started it in 1961. Now we have 80,000 people wiping their feet on our town for 10 days a year. I’m told that it’s one of the most famous literary festivals in the world, and it certainly does wonders for business, but I can’t help but think that it’s gotten out of hand. I know more and more residents who leave town in May just to avoid the crowds. I’ll always stay, of course, but I cringe every time I hear a foreigner call our town “Hay-on-Wye” instead of its proper Welsh name. Common courtesy, I tell you.

It’s been about a month since the last festival ended, and the shop is just now getting back to the point where its stocked and organized. Those bibliophiles who attend the festival are absolutely obsessed with the owning of books—they picked my shelves dry. It’s like they never saw a used book before. I saw a woman smelling one of my books. Smelling it! She claimed that it had that “distinct Welsh odor.” When she came to the till, I had to hold my breath until she took her own distinct odor out of the store. I should stock deodorant in May.

A few stragglers always remain in town after the festival. You’d think that people wouldn’t have any more than 10 days to take out of their lives to come read in Y Gelli, but you’d be wrong. Always individuals, never groups of people. Just young men and women who aren’t used to having books in their lives. They linger in the pubs at night, trying to chat about literature with the locals (who just want to talk about rugby). They position themselves in tea shops during the day, grabbing conversations from innocent bystanders. I’m happy to talk with them if they find their way into the store, but they’re usually in and out in a hurry, off to open ground, places where they can be seen with a book. I think they’re more interested in the idea of reading than reading itself.

One young man has proven to be the exception. I don’t remember seeing him during the festival; rather, he appeared a few weeks after the last of the tents were taken down. I believe it was a Tuesday when he first walked into the store. He nodded in my direction, picked a few books off the shelves, and settled into the overstuffed chair at the back. He just sat there reading until I closed up shop for the day. I didn’t want to startle him, so I rang the little cowbell I keep by my desk to let me husband know that someone is at the door for him.

The young man looked up at the chimes. I caught his eye and tried to smile kindly. “Closing up, sir.”

I could hear his joints creak as he pulled himself to his feet. He scooped up his pile of books and brought them to the till. This surprised me; I hadn’t thought he’d pay for the books. I get plenty of folks who come in here to read and that’s it. Treat this place like a library.

“Howdy,” he said in a gravely American accent. He pulled out his wallet. “I’ll be back tomorrow, but I’d like to pay for these now. What’s the price on them?”

I scanned the stack. Mostly fiction, along with a few liberally illustrated, glossy-paged handbooks. “12 and a penny,” I say. I used to give even prices, but “12 even” sounds like I’m doing them a favor. A woman must have some pride. Plus, Kyffin preferred that customers walk out with some change in hand.

“Sure is,” he replied, smooth as silk. His pale face was darkened by a shadow of stubble, and the coarse hair on top of his head was a touch oily.

“Staying at Kilverts?” I asked, nodding across the street.

“Naw, over at Start. Down by the river.”

“Of course. Don’t miss dinner. Gillian makes the whole town smell like heaven when he cooks.”

The manners on him! All humble and polite with that accent. I could wrap him with a bow.

My husband appeared at the top of the stairs. “Heard the bell,” he announced.

He turned and stomped away. I handed the young man his change and offered him a bag for his books. “No thank you,” he said. “But do you mind if I bring some of these back to read tomorrow? Promise I’ll buy more when I’m done with ‘em.”

I assured him it was just fine and held the door for him as he left. I think I may have curtsied a little.

Kyffin stomped his presence at the top of the stairs again. “Elsi come yet?”

I twirled around to face him. “No she hasn’t come yet.”

“She’ll come. She always comes.” I sighed and went to lock the till. Sometimes I wish that man would look forward to seeing me at the end of the day.

This entry was posted on Thursday, March 17th, 2016 at 7:56 pm and is filed under Uncategorized and tagged with writing. You can follow any responses to this entry through the RSS 2.0 feed.