Have You Visited 10 Cloverfield Lane? 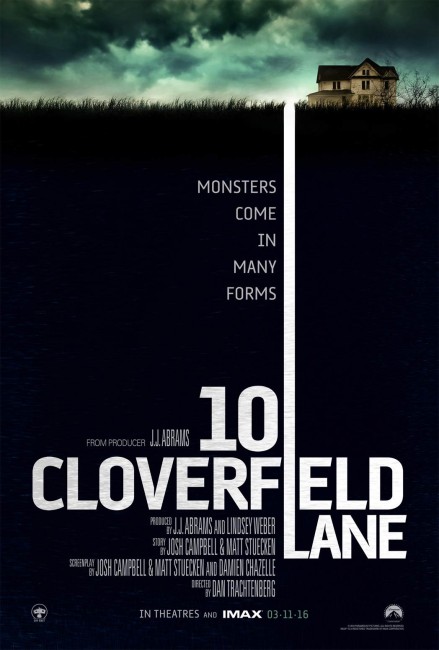 This blog entry is spoiler free.

A few months ago I delighted in the completely unexpected announcement that JJ Abrams had secretly produced a spiritual successor to Cloverfield. It released in theaters this evening, and I caught a screening with a few friends.

It’s the type of movie that is best if you don’t know anything about it, so I’m not here to tell you anything about the plot. I will say, though, that I walked away really impressed with how much tension is in the movie. I don’t think I’ve ever seen a film with so much tension from start to finish. It’s really intense.

It’s also very scary. I fully expect to have some weird dreams tonight.

When I was little, I was terrified of loud noises. I’d always plug my ears when we watched fireworks on the Fourth of July, for example. My parents would even take turns covering my ears.

10 Cloverfield Lane brought me back to my childhood in that way. I resisted for most of the movie, but near the end I sunk down in the couch (we were at a theater with nice leather couches) and plugged my ears. It was the tension added to the volume.

It all added to the experience. I’m not a thrillseeker, but I like being transported, and the film took me back to those July nights when I’d plug my ears while facing the terrors of the night.

The comments of this post are open to spoilers, as I’d like to hear what you thought was the most tense scene/moment in the movie.

This entry was posted on Thursday, March 10th, 2016 at 10:48 pm and is filed under movies and tagged with movies. You can follow any responses to this entry through the RSS 2.0 feed.

3 Responses to “Have You Visited 10 Cloverfield Lane?”