The Best Fried Chicken This Side of the Mississippi 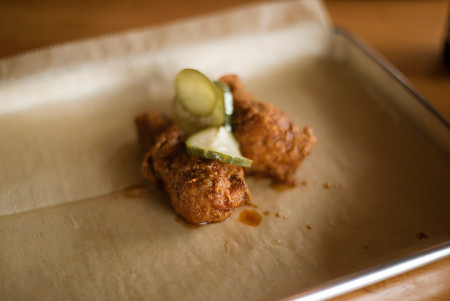 On Saturday I ate the best fried chicken this side of the Mississippi.

Sidenote: Why is it a thing that the Mississippi still delineates the US for comparisons? Is it relevant? Does something happen when you cross over the river? It’s not like there are any competitions between people on one side of the river or the other. Plus, there are plenty of rivers in the US. Why not use one of them?

Anyway, I recently heard good things about a fried chicken restaurant in St. Louis called Southern. They feature something called “hot fried chicken.” I’m partial to spicy fried chicken (the spice keeps the cholesterol at bay, right? Right?), so I figured I’d give it a try.

I went to Southern on Saturday with a few friends. It’s right next to a very popular barbecue restaurant, Pappy’s, but it was neat to see that both restaurants were attracting huge crowds. We had to wait in line for about 20 minutes.

While we waited, we debated which level of heat we should request. There were five levels ranging from “cluckin’ hot” to “original.” Two of us got medium and the other got mild.

I assumed that the heat would come from the spices in the batter, but I realized that was incorrect. They appeared to use the some batter for everything. The heat came from a kind of greasy hot sauce that they poured on the chicken after frying it.

When I raised my first chicken leg to my mouth and took the first bite, the flavor profile instantly resonated with me. It was food arousal at its best, a first kiss that feels right from beginning to end.

That said, medium was way too hot for me. Mild may have even been too hot. It’s the spices in the batter that are so perfectly formulated, so I imagine that original will be perfect.

I’ve eaten plenty of fried chicken in my day, and I dare say that Southern’s is the best. I can’t wait to go back.