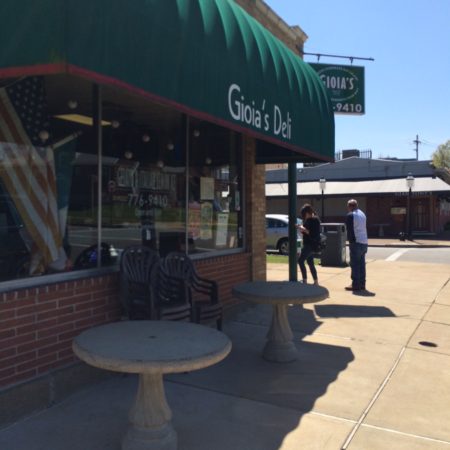 “Off the menu” is such a weird phrase. Colloquially it sounds like you’re doing a normal thing: Looking at the menu and ordering off of it. But when people use that phrase–including me today–we mean that you ask for a dish that isn’t on the menu.

A friend recently shared an article about a guy (Justin) who tried to eat every sandwich on the menu of all 9 sandwich shops on The Hill (a big Italian neighborhood in St. Louis). The task amounted to 158 sandwiches, and the article features his favorites.

The article mentioned a specific sandwich named after the guy, who called himself “The Hill Topper” as he went through his sandwich quest. It was a sandwich that he had ordered from Gioia’s for years before he even decided to eat all 158 sandwiches, and it piqued my interest.

So I went to Gioia’s last week to see if they would make me a Hill Topper. I was there with a friend, so we decided to try two different sandwiches.

I’d never ordered off the menu before, so I was a little nervous as I approached the counter. “Yeah, I’ll have a Spicy Daggett and…a Hill Topper?”

Fortunately, the chef broke into a broad grin. “Nice! You know Justin?” I told him no, that I just read a blog about the sandwich.

It was pretty awesome. I think I now know how people feel when they order off the menu at In and Out, which I’ve never done. There’s almost a sense of instant intimacy with the restaurant, even if you’ve never been there before.

Also, the sandwiches were delicious. That helps.

8 Responses to “Have You Ever Ordered Off the Menu?”