April 20th isn’t a date that ever occurs to me as something special, as I don’t smoke marijuana. But sometimes when other people are celebrating a special occasion, I like to join in the excitement. That’s what happened today. (And no, I didn’t do anything illegal that I’m aware of.)

I was out at lunch at a fantastic burger/Mediterranean restaurant called Layla. They have great turkey burgers, so I was planning on getting one of them.

But the waiter cheerfully informed us that to commemorate 4/20, they had two special deals: A half baked burger with bacon, peanut butter, jelly, and Funyuns, as well as an “Up in Smoke” burger (barbecue pork and pickles) at a $4.20 discount. For some reason the whole idea of ordering a special burger on a day that’s special to some people put me in a festive mood, so I ordered the Up in Smoke burger. Here’s what it looked like: 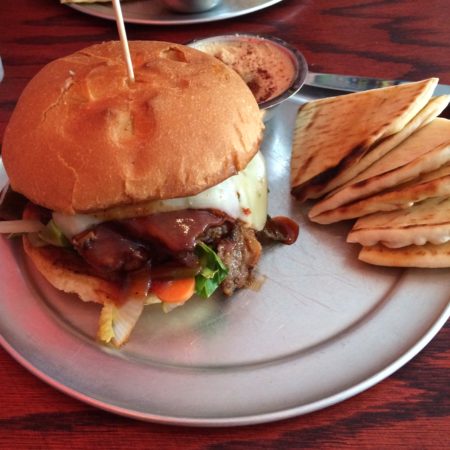 It was delicious. I love that hummus is a side dish at this restaurant. I only ate half the burger and none of the hummus, so that’s two more meals for later!

Because of the discount, I tipped well…but then I realized I was missing out on an opportunity, so I changed my tip to this:

(Also, to be clear, I’m not endorsing an illegal activity [though, at the same time, I don’t judge people who do this particular activity]. My “celebration” of 4/20 had absolutely no connection to marijuana.)

This entry was posted on Wednesday, April 20th, 2016 at 11:52 pm and is filed under food and tagged with restaurants. You can follow any responses to this entry through the RSS 2.0 feed.