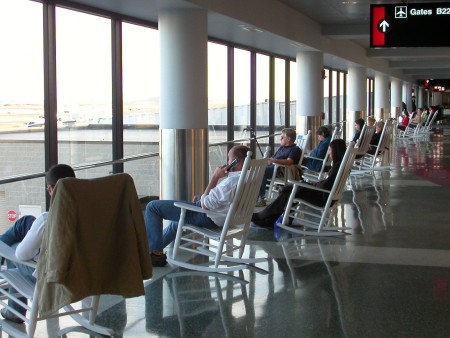 So, I wasn’t sure if I was going to tell this story, because once I put it on the blog, it’s permanent. But what good is a story if I don’t tell it on my blog?

I mentioned earlier this week that I traveled to Virginia to speak at my old high school and spend Easter time with my family. All of that went great. This story is about the trip home.

I flew from Richmond to Charlotte, and I had a 2-hour layover before my flight to St. Louis. The Charlotte airport is actually really nice, and there were tons of people there for a random Monday afternoon.

When I’m between flights, I like to stay on my feet. I figure I’ll spend the flight sitting down, so I might as well stretch my legs during the layover. Plus, moving walkways are one of my favorite things ever.

As I walked around, I was soaking up the mid-afternoon sun. There are tons of big windows in the Charlotte airport to let all that light in. The airport even has rocking chairs scattered throughout the terminals–it has a certain Southern charm to it.

But as I walked around, I became acutely aware that I was spending a beautiful day indoors. Instead of breathing sweet tea-flavored Charlotte air, I was inhaling the same recycled air as everyone else. I really wanted to step out on a patio and just be outside for a few minutes.

That’s when it happened.

“It,” in this case, is that as I was stepping off a moving walkway, I noticed an airport employee open a door in the side of the terminal and walk inside. As strange as it sounds, this was a revelation. I’ve always considered terminals to be these sealed chambers where you’re stuck inside.

But there it was, clear as day: A perfectly normal door leading outside to an innocuous paved area. There were a few trucks out there, but it didn’t seem special or–more importantly–dangerous. Like, planes weren’t landing in this area.

I didn’t do anything right away. Instead, I turned around and got back on the moving walkway. As I did, I pondered if I really wanted to go outside. Was it that important to me? Couldn’t I just stay inside?

Then I got back on the moving walkway moving in the opposite direction–back towards the door–and my thoughts reversed. Sure, I could stay inside, no problem. But I also didn’t see any problem with stepping outside for a few minutes. I was restricting myself for absolutely no reason.

So I went with my gut: When I got off the walkway, I walked over to the door and simply walked outside.

I’ll be honest: It was a little scary. The airport certainly didn’t intend for that area to be a patio. But in that one second, I was outside. I was no longer constrained to the glass chamber of the terminal.

It was scary, but it was also exhilarating.

The door was locked from the outside.

Of course it was. I mean, it wasn’t as obvious as it should have been. I had seen the airport employee walk in the door, so I figured it was unlocked. But I was wrong. There was an ID card lock on the door.

What I should have done was knock on the window next to the door. Anyone walking by could have let me in. But I was incredibly embarrassed. It hit me that I was in a place I shouldn’t be, and I truly did not want anyone–even complete strangers–to see me there.

So instead of tapping on the window, I did the opposite–I walked down the stairs to the paved area below (I want to call it a parking lot, because that’s what it looked like, but no one was parked there).

I’ve always wondered why my cats are so afraid of the world outside of the condo. To them, their world is the condo. That’s all they know. Everything else is big and scary.

That’s how I felt when my feet hit the pavement. I went from a world I know–the confines of the terminal–to the massive airport world that exists outside. It was terrifying.

I was terrified, but I was trying not to look terrified, as I didn’t want anyone to think I was up to anything nefarious. I just wanted to find someone–some regular Joe blue-collar worker who would let me back inside–and go to my gate and never leave again.

But there was no one there. Really. I could see airplanes in the distance, and I could see people in the terminal, but that was it. I couldn’t see anyone else. So I just started walking in the hopes that I would eventually run into someone. I mean, obviously I would. It’s a fully functional, busy airport.

I could go on with this story, but the clock struck midnight, and it’s now officially April Fools Day, so it’s time to publish this post. No way did I go outside at the Charlotte airport! I wanted to–the story is true up until the part where I step outside, which I did not do–but I know better than to just walk out of a terminal. 🙂

I hope you have a wonderful April Fools Day and that you’re able to make someone think–even just for a minute–that the world is a little stranger than it really is.

This entry was posted on Friday, April 1st, 2016 at 12:05 am and is filed under April Fools, bad ideas. You can follow any responses to this entry through the RSS 2.0 feed.

3 Responses to “The Airport Story”