Earlier this year, board game developer, designer, blogger, and enthusiast JR Honeycutt wrote a blog post about the 10 board games in his collection that he would keep if he had to give away the rest and could only play those games from now on.

I love the idea of this list, as it presents a markedly different scenario than what my top 10 favorite board games are for two reasons: One, I don’t own all of my favorite games–in fact, 5 of my 10 favorite games are owned by friends. Two, forever is a long time to only play 10 games. It necessitates a certain level of variety and variability, and they have to include games I enjoy both teaching and playing.

I chose not to include any games that my company publishes for this list. I tried to find a game for each of the categories of games I’d want to have handy for a long time–the category is noted in parentheses. Here it is:

10. Sheriff of Nottingham (negotiation): The thing I love about Sheriff of Nottingham, a game where you’re trying to get the best and most cards past a rotating “sheriff,” is that there are very few rules dictating how you can negotiate. It’s a wide-open environment for creativity.

9. For Sale (filler): I would need to keep a filler game to play in those 10-15 minute gaps when I’m waiting for everyone to show up for game night or when my table finishes a little earlier than another table. With it’s tension-filled auction system and fast play, For Sale is my pick. (I almost chose The Game, which is great, but it isn’t quite a filler, as I’ve seen games take 30-45 minutes).

8. Good Cop Bad Cop (large-group hidden teams): The great thing about Good Cop Bad Cop is that there’s no pressure to bluff or lie, but it still provides a great experience for up to 8 people.

7. Stone Age (light Euro): I love Euro games, and Stone Age is one of those lighter games that’s easy to teach while still being enjoyable for experienced gamers. There’s also a surprising amount of variation through the various upgrades, dice, and cards.

6. Ticket to Ride (gateway): I always enjoy Ticket to Ride. It’s one of those games that has just the perfect amount of tension–it’s enough to keep you on the edge of your seat, sneaking glances at the routes you covet, but not so much that your game is ruined if someone else takes the route you want (until late in the game).

5. Blokus (abstract): I only want to ever play Blokus with exactly 4 people, but when I get that chance, the abstract endorphins in my brain are firing at full throttle. The spacial element just clicks with me.

4. Burgle Bros (cooperative): It surprised me how instantly I knew I wanted to put this game on my list. This slot would normally be occupied by Forbidden Desert, but I don’t own it…yet I don’t mind, because I love Burgle Bros. It’s a fantastic heist game with a really clever twist on how you can manipulate the guards who are trying to catch you. 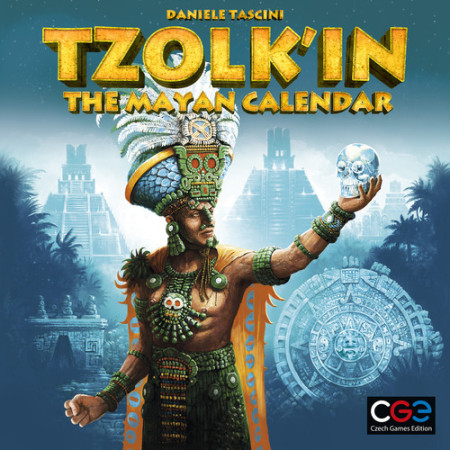 3. A Fake Artist Goes to New York (social/party): It was really tough to pick this one over Telestrations, and as the two scratch the same itch of social/party games that don’t ask someone to perform in the spotlight and still incite a ton of laughter.

2. Kemet (direct conflict): There’s so much to love about Kemet: the upgrades, the freedom to attack without feeling bad about targeting someone, the unique monster miniatures, the simplicity of the actions…it’s fantastic.

1. Tzolk’in (heavy Euro): I could play Tzolk’in, a beautiful game with workers you place on ever-turning wheels, over and over again. There are so many different combinations of strategies. Tzolk’in has had a big impact on my game designs, and for good reason–I love it.

That’s my list! What’s yours? Do you make a point of owning all of your favorite games?

This entry was posted on Sunday, April 10th, 2016 at 9:11 pm and is filed under list and tagged with board game. You can follow any responses to this entry through the RSS 2.0 feed.