What Did You Think of Captain America: Civil War? 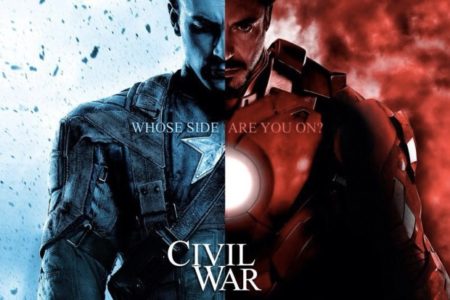 I’ve been looking forward to Captain America: Civil War for a while now. The early trailers made me want to know more: Why are Captain America and Iron Man fighting? Why are they dividing up into teams? Who’s on each team? Do they really want to hurt each other?

I saw the movie on Saturday, and I really enjoyed learning about all the answers to those secrets. I won’t spoil them here, but I do want to talk about one particularly clever element in the movie.

In most other superhero movies–particularly those in the Marvel universe–the good guys end up fighting an enigmatic villain and their hoards of minions. The minions are nameless, generic people/aliens/robots who mindlessly serve their leader and go down with the slightest punch.

Not so in Captain America: Civil War.

In this film, the heroes are fighting each other. Unlike the generic minions of years past, I care about these characters. They’ve been around since Iron Man was released 10 years ago or so. I feel like I know them, and I don’t want them to get hurt.

There are about 4 incredible set-piece action sequences in the movie, and each one has gravitas because the heroes are fighting each other.

What makes this different than Batman vs. Superman? Other than the haphazard script, I think the problem there is Superman’s near-invincibility. There are no superheroes in Civil War that have that level of power creep. Even when Iron Man gets hit, you know it hurts.

I’d love to see this type of meaningful action in other superhero movies. That isn’t to say they always have to be hero vs. hero. But if you have a villain, it makes each scene more powerful if you find yourself rooting for the villain just as much as the hero. The perfect example of this–perhaps one that will never be eclipsed–is The Joker in The Dark Knight. Loki does well for himself too.

What do you think, either about this idea or about Captain America: Civil War?

This entry was posted on Monday, May 9th, 2016 at 9:01 pm and is filed under movies and tagged with movies. You can follow any responses to this entry through the RSS 2.0 feed.

4 Responses to “What Did You Think of Captain America: Civil War?”