When Was the Last Time You Went to the Hospital? 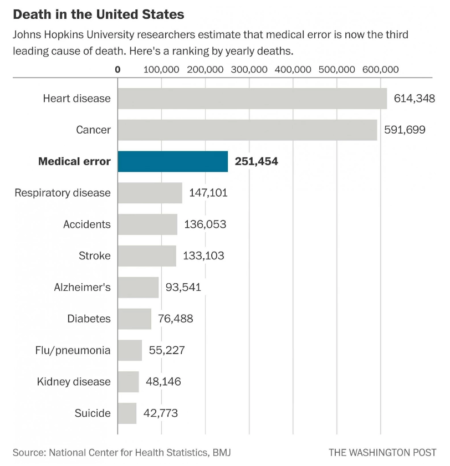 Last week, a friend mentioned a statistic to me that was so outlandish, there was no way it could be true.

“Apparently,” he said, “Hospitals cause more deaths in the US than anything other than heart disease and cancer.”

What? Hospitals cause deaths? That doesn’t make sense.

But then I read the article he was referring to. It clearly says that medical errors in hospitals and other health-care facilities are the third-leading cause of death in the US. They claim over 250,000 lives each year.

The article mentions that the category includes “everything from bad doctors to more systemic issues such as communication breakdowns.”

It’s been a while since I’ve gone to the hospital (a freakish peritonsillar abscess nearly 10 years ago–don’t do a Google image search for it). The care I got was good–I never felt like my life was at risk.

But this is kind of scary, isn’t it? I don’t want to go as far as to say that we’re safer not going to the hospital when we’re ill, but it seems like if 250,000 people are dying because they go to the hospital, something needs to change.

What do you think? Does this concern you?

This entry was posted on Wednesday, May 18th, 2016 at 11:09 pm and is filed under Uncategorized. You can follow any responses to this entry through the RSS 2.0 feed.

9 Responses to “When Was the Last Time You Went to the Hospital?”