Have You Ever Read a Local Food Blog and Immediately Did This? 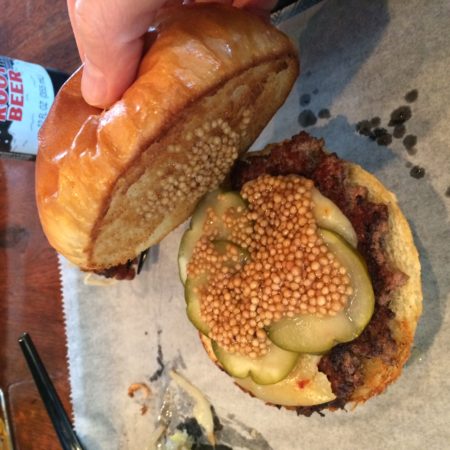 As you know from yesterday’s entry, I went out for dinner at a Mexican restaurant (isn’t it odd that you know exactly what a complete stranger ate for dinner yesterday?) I prefer to spread out restaurant visits, but then something happened today.

Around 11:15 in the morning, I was reading through Feedly (my RSS feed of blogs) while I waited for a phone call. I innocently clicked on a link for a St. Louis food blog I enjoy called Whiskey and Soba.

It was there that I found a review of a burger. Not just “a” burger. THE burger. It was one of the most beautiful and unique burgers I’ve ever seen.

I wanted it in my belly.

The thing that surprised me the most was the urgency with which I wanted it in my belly. I didn’t want it in the generic future or next week or tomorrow. I wanted it immediately.

I must have blacked out, because just over an hour later, I found myself sitting at Guerilla Street Food, eating that burger. (And yes, it was totally worth it, though I wish I had gotten the double instead of a single patty. The single isn’t as big as the photo makes it look.)

I have newfound respect for the power of local food blogs with pretty pictures. It’s a good thing I have such a flexible job!

Have you ever done this? Read about a specific food item and been unable to resist the urge to try it immediately?