Does a Robot Feed Your Pets? 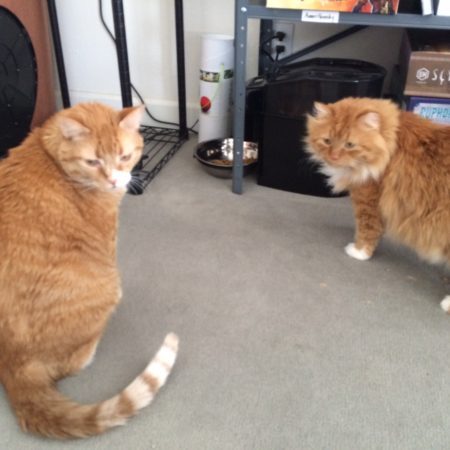 A few days ago, I got a disheartening call from my vet: The test results were in, and Biddy’s diabetes has gotten worse over the last 6 months. He’s fine (kind of), but my vet suspects that he might be developing a resistance to insulin, which I give him twice a day.

My vet said the solution is that we really need to get Biddy’s weight down. Biddy has weight 20 pounds for the last 5+ years with hardly any fluctuations, so I consider it to be his normal weight, but I gotta trust the vet on this one.

I’ve tried limiting Biddy’s food intake in the past, but he can get quite fussy if he doesn’t always have access to food. If the food bowl is empty, he immediately goes into Panic/Loincloth mode, which isn’t fun for anyone.

So I decided to solve the problem in the most futuristic way possible: I bought a robot.

Specifically, I bought the PetSafe PFD00-14574, an automatic food dispenser. My search turned up a variety of options, but this one was the best rated. Most importantly, it appeared to secure the food quite well. Biddy’s big and smart–he would have defeated most of the other dispensers in minutes.

I’ve been using the PetSafe for a few days now. I’m more amused than Biddy and Walter, as the dispenser triggers some Pavlovian response in me that wants the whole family to gather around and rejoice in the spoils. At best, the boys are mildly amused.

The one issue I’m seeing so far is that Walter has pounced on Biddy three times while Biddy’s been eating. I suspect that Walter is marking his territory, as there used to be two food bowls, and now there’s only one. I’ve seen some people solve this by rigging up a device that splits the food into two bowls–I may have to try that.

Have you ever used an automatic dispenser for your pets/children? How has it worked out?

This entry was posted on Thursday, September 1st, 2016 at 11:25 pm and is filed under personal and tagged with cats, personal. You can follow any responses to this entry through the RSS 2.0 feed.

10 Responses to “Does a Robot Feed Your Pets?”