Is There Any Sport You’re Scared of? 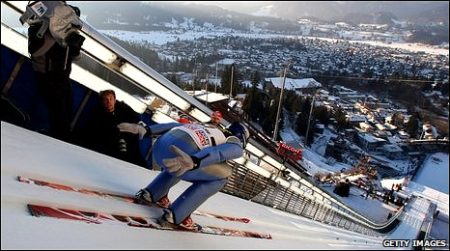 There was a time, years ago in my youth, that I thought I might be a good pole vaulter. I was a sprinter in high school, I was lean, and I have decent body control.

However, there’s a problem: To be a pole vaulter, you must allow yourself to spring 20+ feet in the air balanced on nothing more than a thin pole, and then come crashing down.

I had a similar thought today while watching a movie called Eddie the Eagle. It’s about a ski jumper. Yeah, ski jumping. A sport as terrifying and dangerous as it is thrilling. You actually get to fly for about 5 seconds–it’s nothing but you, your skis, and the open slope.

Eddie starts with a 15m ramp, which in itself looks quite scary. I skied and snowboarded a bit back in the day, and I generally avoided going airborne. I’m sure it’s exciting to jump a little bit, but I just didn’t have the balance to land well.

Eddie then moves up to the 40m ramp, then the 70m. And probably the 90m? I don’t know. I haven’t finished the movie yet.

But of all the sports, I can’t think of one that’s scarier. I mean, just like pole vaulting, you’re choosing to fall. Falling is part of the sport. And sometimes you’re going to fall hard. Especially the first few times. It’s just a given, right?

Are there any sports that have such a scary barrier to entry that you don’t think you could ever get past it?

This entry was posted on Wednesday, September 7th, 2016 at 11:29 pm and is filed under sports and tagged with sports. You can follow any responses to this entry through the RSS 2.0 feed.

5 Responses to “Is There Any Sport You’re Scared of?”