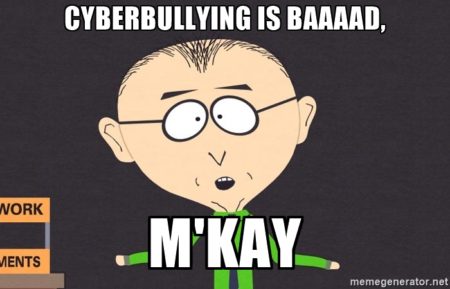 Have you ever said something online (text, e-mail, social media, etc) that you’ve immediately or soon after regretted? Something uncharacteristically harsh, mean, cruel, or ignorant?

I definitely have. Sometimes I’ve realized my mistake right away, whereas other times it took me a few hours or the prompting of someone else to realize that I wasn’t being the best version of myself online.

My thoughts turned to my experiences online–both with my weaker moments and with interactions with others–when I watched a segment on Shark Tank last week about ReThink, an app designed by Trisha Prabhu that reduces cyberbullying.

It’s how the app works that makes it so remarkable. Once it’s installed on your phone, it runs an algorithm in the background that pays attention whenever you type anything.

If the algorithm thinks you’ve written something offensive, as you press send, a message pops up saying, “This message may be hurtful to others. Are you sure you want to post this message?” You can then select “yes” to post it anyway, or “no” for the chance to rewrite it.

I have to admit, when I first heard Prabhu describe this system, I thought it would have a very minimal impact, both in the short and long term. But I was wrong. Check out the stats (quoted from this page):

I hope the Sharks can get this app out there everywhere. And if the algorithm develops to the point that it can prevent me from being a jerk every now and then online, I’ll definitely install it!

What do you think about this app?

This entry was posted on Sunday, October 2nd, 2016 at 9:13 pm and is filed under technology, their brilliant ideas and tagged with technology. You can follow any responses to this entry through the RSS 2.0 feed.

4 Responses to “Can this App Save the Internet?”