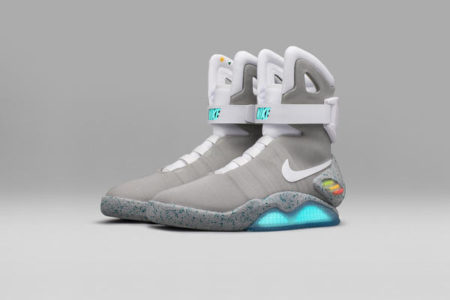 I was shocked and delighted multiple times today over a pair of shoes, which is possibly the least likely category of things to shock or delight me. It’s right up there with “apricots” and “Crossfit.

A while ago, Nike announced that they had created a few pairs of the self-lacing shoes from Back to the Future 2 and were auctioning them off for charity. They ended up raising a ton of money to seek a cure for Parkison’s, which was perfect, because Back to the Future star Michael J. Fox suffers from that disease, and the disease makes it difficult to tie one’s shoes. It’s the perfect storm.

However, like most people, I don’t have thousands of dollars to spend on shoes, so while the news was cool, it didn’t stick with me.

First, Nike announced that they’ve made 89 more pairs of the Back to the Future self-lacing shoes. They’re called the Nike Mag, and again the proceeds for the shoes are going to fight Parkinson’s.

The big difference, though, is that instead of spending thousands of dollars, the cost is $10 to enter a lottery for a pair of the shoes. Which of course I did. Nike will announce the winners in about a week.

I thought that was enough delight for one day, but then I learned that Nike is also making self-lacing shoes en masse. It’s called the HyperAdapt, and it really is what it says it is: The shoe ties itself based on the size of your foot, and you can adjust it with the push of a button.

I’ve been geeking out all day about this news. I don’t even know if I’ll buy a pair–I buy shoes about once every 10 years–but they’re self-lacing shoes! How cool is that?! I’m just happy they exist.

What do you think? Are you going to enter the lottery?

This entry was posted on Tuesday, October 4th, 2016 at 9:45 pm and is filed under technology and tagged with technology. You can follow any responses to this entry through the RSS 2.0 feed.

2 Responses to “Would You Buy Self-Lacing Shoes?”