What Do You Do When Your Parents Read Your Childhood Love Letters?

A few hours ago, I got a text from my mom asking who “Shelby” is. In response, my mom sent me this, along with the explanation that she and my dad were going through my old letters and notes in an attempt to separate the trash from the treasure: 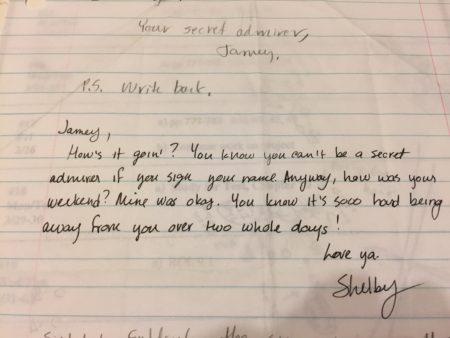 I must admit, I was a bit mortified. I was home last week and was tasked with deciding what to keep and what to throw away, and I threw away pretty much everything except old letters from my childhood.

I didn’t think my parents would actually read the letters! And honestly, after the initial shock, I realized that it doesn’t bother me all that much. I just really don’t want to know what they’re reading.

So let’s talk about Shelby. I’ve thought about it, and I’m pretty sure I know who she is. At least, in a vague, depths-of-my-memory kind of way.

When I was 15 (a freshman in high school), I took the bus to school. The bus didn’t make a stop near my house (it was a magnet school, so kids were bused in from all over); instead, it dropped me off at a local library.

One day I was sitting in the library waiting for my mom to pick me up when a girl walked over and handed me a note. “It’s from my friend,” she said, pointing to a cute blonde girl across the room. I had noticed her before, but in a trend that continues to this day, my thing when I see a cute girl is to look at her from across the room and never actually say anything.

However, Shelby was a bit more bold than I. She revealed in her note that she thought I was cute, which was very nice to hear.

Unfortunately, the note also revealed she was in seventh grade. At the time, that seemed like a monumental age gap, especially since I was in high school and she was in middle school. In hindsight, maybe it wasn’t as big of a deal as I thought. I don’t know.

But she was still cute, and it felt really good to be the apple of someone’s eye, so I got up the nerve to go say hi to her. We talked for a few minutes, and when I had to go, she told me to write her back.

What proceeded over the next few weeks was a series of notes written on the same pieces of paper. Remember, this was before e-mail. As you can tell from the image here, there wasn’t much of substance being discussed. But it was fun.

The flirtation lasted a a few weeks, and I can’t remember how or why we stopped writing and talking. Apparently I valued the conversation enough to tuck away the letters in my personal archives, not realizing that my parents would read them 20 years later. Well played, Mom and Dad.

Have your parents ever stumbled upon your love letters? How would you respond if they did?

This entry was posted on Monday, January 2nd, 2017 at 8:02 pm and is filed under humor and tagged with humor. You can follow any responses to this entry through the RSS 2.0 feed.

7 Responses to “What Do You Do When Your Parents Read Your Childhood Love Letters?”

Leave a Reply to Joseph