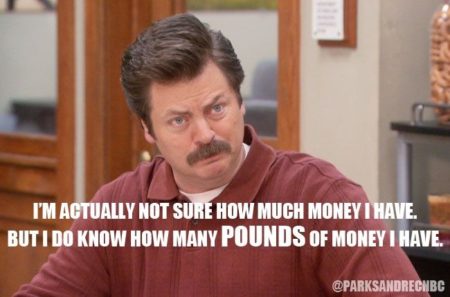 I watched Parks & Rec when it was new, but it’s been long enough that it’s mostly fresh to me now. It’s a great show for when I want to smile while cooking dinner or eating lunch if I don’t have anything else to watch.

Since I’m watching entire seasons in condensed form, I’ve noticed something that makes me respect the show even more than before: There are a ton of consistent callbacks.

A callback is when the audience learns something that is referenced in the future. Most shows only do this within each episode. Parks & Rec has callbacks that span entire seasons.

For example, in the first season, Ron Swanson has a punchline where he mentions that he keeps all of his savings in gold, and they’re buried somewhere. The gold is referenced in several other episodes in future seasons, culminating with it becoming a major discussion point when he writes his will near the end of the show.

Similarly, I watched an episode tonight where Jeremy Jamm brings a gong to a council meeting, saying that he likes Asian things. Several seasons later, Leslie goes into Jamm’s home and sees that it’s filled with random Asian stuff.

What I love about this is that the writers and producers built these characters consistently over time. They must have had databases of information about each character that they referenced when looking for jokes and subplots. But they’re always using that information to build the characters, not just make a one-time joke.

Compare this to, say, Friends. Every Thanksgiving on Friends they reference a tradition they do “every year” even though it’s completely different than the previous year. Friends got some callbacks right, but I think if you watched it now, you’d see a ton of inconsistencies over time.

I don’t think I’ve seen a show do it as well–or as subtly–as Parks & Rec except maybe for How I Met Your Mother. Though that’s an entire show built on flashbacks.

Have you noticed this in shows you love? Which shows do it well and which are inconsistent?