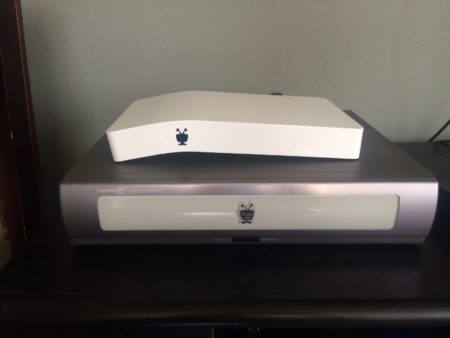 At the time, there were no DVRs. As far as I know, TiVo was the first digital recording device for television, and it actually worked really well. I decided to take the plunge and purchase a lifetime subscription.

Boy did I milk that subscription! I broke even after 3 years, and then I just kept going. Sure, my TiVo could only hold about 20 shows at a time, and it wasn’t HD. But it was free! So I just kept going…until last week.

That’s when TiVo contacted me with an offer I could not resist: For a nominal fee (and the cost of a new TiVo), I could transfer my coveted lifetime subscription to the new device. Nearly 12 years after my original purchase, again I took the plunge, and with the help of a friend who is good at plugging things into other things, it was set up by Friday evening.

I’m happy to report, my friends, that it is magical. Here’s why:

I adored my old TiVo, but I’m very grateful for the new one, and I look forward to the next 12 years with it.

What’s the longest you’ve ever held on to outdated technology, and how did it feel if/when you upgraded?

This entry was posted on Sunday, April 9th, 2017 at 9:11 pm and is filed under technology and tagged with technology. You can follow any responses to this entry through the RSS 2.0 feed.