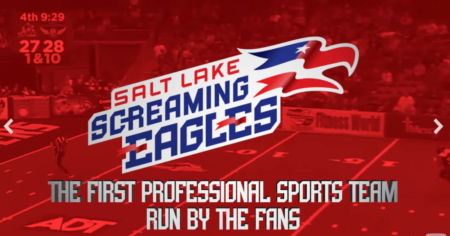 Have you ever watched the coach of your favorite sports team make what you think is a terrible decision? I know I have. Sure, it’s always from the luxury of my couch, not in the heat of the moment surrounded by tens of thousands of screaming fans. But still.

I can’t find the post, but at some point I wrote about the idea of letting fans vote on certain plays. So I was delighted to learn that a real football team has taken it a step further and given fans complete control over the playcalling.

The Salt Lake Screaming Eagles, an IFL team, is run by fans on an app. Anyone can download it. By answering questions about the team, answering questions, watching game tape, and voting on non-game decisions (like “should we sign this player?”), you earn points that you can spend to make playcalls during the game. I think the idea is opposing fans wouldn’t put in the effort to do all that and dilute the data.

I’d love to say that the team is undefeated using this innovative and engaging method, but they’re only 1-4 right now. Still, I think it’s awesome that they put that type of control in the hands of their fans.

Which teams do you root for? Would you like to have the opportunity vote on playcalling for them from time to time?

This entry was posted on Thursday, April 6th, 2017 at 9:35 pm and is filed under sports and tagged with sports. You can follow any responses to this entry through the RSS 2.0 feed.

2 Responses to “The Crowdsourced Football Team”