Have You Watched “The OA”? 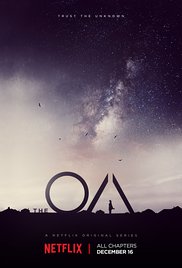 A few months ago, I discovered a show on Netflix called The OA, but I didn’t watch it. Instead, I thought it would be more efficient to read recaps about it, and I even wrote a blog entry that referenced the varying lengths of each episode.

In the comments of that blog entry, a friend urged me to actually watch the show. Then so did a few other friends. And recently I got a new TiVo that lets me watch Netflix on my TV, so a few days ago I needed something to watch, and I chose The OA.

Without spoiling anything, the basic premise of the show (introduced in the first few minutes) is that a woman who went missing years ago mysteriously reappears. Even though she was blind when she went missing, she can now see.

Here are a few things I loved about The OA, spoiler free:

If you’re willing to suspend belief for 6-7 hours and watch a brilliant show, I’d highly recommend The OA.

I’d like to make the comments of this post a place where people can discuss the show freely, so beware of spoilers. If you’ve seen The OA, what did you think? Do you have any theories you’d like to share?

This entry was posted on Wednesday, May 3rd, 2017 at 11:25 pm and is filed under television and tagged with television. You can follow any responses to this entry through the RSS 2.0 feed.