Is Tuesday Really the Best Day for Tacos? 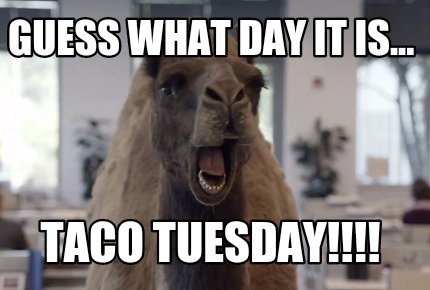 Margarita Monday, Taco Tuesday, Wacky Wednesday, Throwback Thursday, Freaky Friday…these are just a few alliterations used by restaurants, social media, and movies. But do alliterations matter as much as we think? I’m here to find out.

The other day, a friend mentioned that it was Taco Tuesday at her house. It was Tuesday, and she was making tacos, but she made it sound like some official thing. Apparently, it was: When she was growing up, her family always ate tacos on Tuesday.

I didn’t think much of it at first. After all, I’ve heard plenty of restaurants who also feature Taco Tuesday.

But here’s the question: What if Tuesdays aren’t actually the best day for tacos?

Putting aside the fact that tacos are generally awesome on any day of the week, think about that for a second. The only reason that there are tacos on Tuesdays is the alliteration. But there’s no actual correlation between the second weekday and tacos. Beef isn’t cheaper on Tuesdays. Tortillas don’t taste better on Tuesdays. What if…bear with me here…what if Sunday is actually the best day for tacos? Or Friday?

The same goes for the other days: What if margaritas are even better on Thursdays? Could it be argued that Monday is even wackier than Wednesday and Saturday is marginally freakier than Friday? Is it possible that throwbacks are more nostalgic on Tuesday?

There’s no way to prove any of this, of course. And I do see the benefit of alliteration–it helps us remember stuff. But I would posit to you that we may rely too heavily on alliterations to make decisions about when to do certain things, as there may be an even better day for things that we ignore simply because the first letter doesn’t match.

A crazy theory, I know, but that’s why I’m here. What do you think?

This entry was posted on Sunday, August 6th, 2017 at 9:39 pm and is filed under question of the day. You can follow any responses to this entry through the RSS 2.0 feed.

3 Responses to “Is Tuesday Really the Best Day for Tacos?”

Leave a Reply to Sean