Have You Ever Eaten Vegan?

Years ago, I was dating a woman who was Coptic Orthodox. Part of her religious tradition was to go vegan for about a week each year, and she asked/told me to do it with her. So I did.

All I can remember from the experience was (a) I was hungry all the time and (b) I was delighted to learn that Oreos are vegan. Dairy milk isn’t, but almond milk is fine.

Recently I’ve been trying to eat healthier, so after long eschewing the vegan restaurant in my neighborhood, Pura Vegan, I decided to give it a try.

My first meal at Pura Vegan was a pair of tacos. They’re described as, “Two sprouted organic corn shell tacos grilled and filled with our house made walnut carrot meat, spicy tahini cheese, cilantro and alfalfa sprouts.” Avocado is optional.

Much to my surprise, I really liked these tacos. I typically don’t like non-meat products that try to disguise themselves as meat, but I loved how these tacos had the same taste and texture as beef tacos. 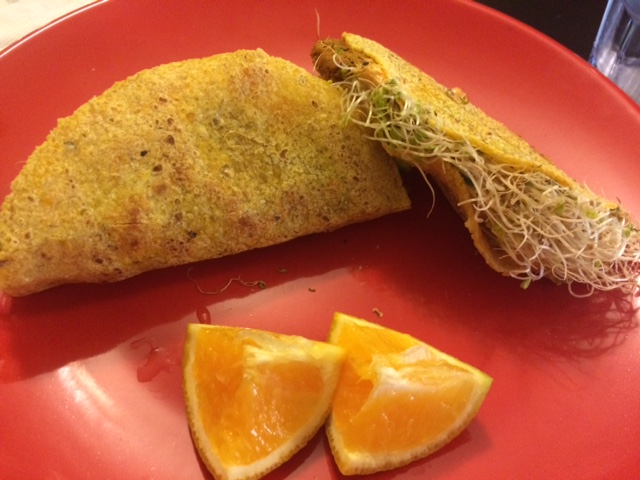 My second experience was a bit of a deeper dive into the vegan world, and it didn’t work out as well. This time I ordered Pura Vegan’s KIND sausage sammie, which includes “house made sprouted seed & nut sausage patties w/ tahini spicy cheese, cashew mayo, alfalfa sprouts & tempeh bacon on a toasted sprouted wheat bagel.” It was fine, but unlike the tacos, it’s not something I would order as a viable alternative to a burger. 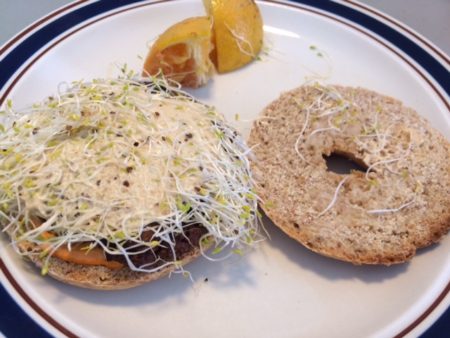 I’ve been back a third time for the tacos, and I’m sure I’ll return again, both because I like the food, I’m curious about the smoothies, and I like to support neighborhood businesses. The key for me is to find foods that taste good and still provide me with the nutrients I need.

Have you ever tried eating vegan or vegetarian? What were the results? Do you have any recommendations?

This entry was posted on Monday, September 4th, 2017 at 10:56 pm and is filed under food, restaurants and tagged with restaurants. You can follow any responses to this entry through the RSS 2.0 feed.

14 Responses to “Have You Ever Eaten Vegan?”

Leave a Reply to Stephen