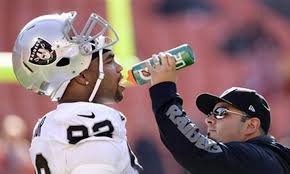 As I do every weekend, I watched a little football (college and NFL) on Saturday and Sunday. There was a moment during one of the games that I noticed something odd. I’ve seen this hundreds of times before, but I never realized how weird it is.

A player ran over to the sidelines after making a big play, and a waterboy showed up at his side. The waterboy held a water bottle up to the player’s helmet, squirted some liquid (water or Gatorade) into the player’s mouth, and walked away.

I’d like to look at this from a few angles. The first is from the angle of the waterboy him/herself. Now, I truly don’t want to belittle anyone from making a living (apparently NFL waterboys make $53k a year). But why? Your job is to squirt water in another human being’s mouth. Isn’t it a bit…demeaning?

The second is from the angle of the player himself. Why would you want someone else to squirt water in your mouth when you could easily do it yourself? In fact, you can probably do it better than someone else, as you can control the velocity, angle, and synchronization with your mouth.

Think about this for a second, dear reader. Imagine yourself at work tomorrow, and you get thirsty. Instead of taking a sip of water, someone runs over to you and squirts water in your mouth. Just on a level of human interactions, would that make you comfortable?

What do you think? Have you ever served as a waterboy or been served by one? Would you want to?

This entry was posted on Wednesday, October 11th, 2017 at 11:09 pm and is filed under sports and tagged with sports. You can follow any responses to this entry through the RSS 2.0 feed.

10 Responses to “Waterboys in Football: Why?”