Have You Ever Used Omaze? 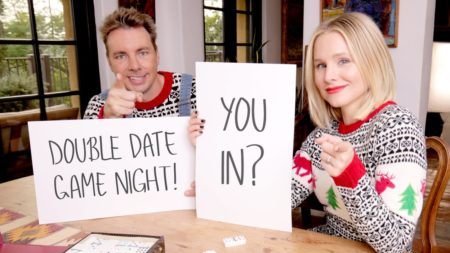 For a few years, I’ve heard talk show hosts promoting a website called Omaze. It’s a website where anyone can donate to a specific item linked to a specific charity, and the amount you donate determines the number of entries you get in a virtual lottery for a special item or experience.

I’ve always thought it was a cool concept, and there are tons of celebrities who donate unique experiences. But I’ve never been compelled to actually donate…until now.

The item is a game night with Kristen Bell and Dax Shepard. This delightful couple has been unabashed about their love for board games, particularly Settlers of Catan. I love that they wear their geek on the outside, and that they do it together.

While I like Bell and Shepard–at least, I like who they seem to be based on various talk show appearances, TV shows, and movies–I’m not one to get all giddy about celebrities. What tipped me over the edge of making a donation is that in the very slim chance that I won, I thought it might be fun for me to represent the Stonemaier Games community in such a rare opportunity.

I could let fans vote on the game I bring to the game night (I’m happy to play Catan, but it would be neat for Bell and Shepard to also try something new), and maybe a Stonemaier supporter could join me on the “double date.”

Basically, I thought it would be neat for an ambassador of the gaming industry to have an evening of gaming with two well-known celebrities who like to play games. Am I the best representative for the industry? Absolutely not. Would I at least not embarrass us all? I think I can manage that.

Have you ever donated to Omaze, and if so, what were you hoping to win? What game do you hope the winner of the Bell/Shepard game night plays with them?

This entry was posted on Monday, December 18th, 2017 at 11:35 pm and is filed under Uncategorized. You can follow any responses to this entry through the RSS 2.0 feed.

5 Responses to “Have You Ever Used Omaze?”