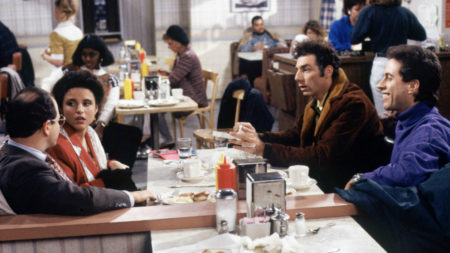 Okay, so I know that plenty of “television happens” to make shows work. Like, I understand that many shows are filmed in studios, not in the actual apartments, offices, and homes where they’re set.

I also get that whenever we’re shown an exterior shot, it doesn’t mean that the actual set is inside that exact building.

Last, I completely understand that when most TV shows are filmed in restaurants, they don’t shut down the real-life restaurant to film the scene.

I know these things. I’ve known them for years.

Yet somehow it never occurred to me until today that Seinfeld wasn’t filmed in an apartment and a restaurant in New York City.

You read that correctly. Never occurred to me. Completely over my head.

What cued me in? I was watching an episode of the 7th season of Curb Your Enthusiasm today. This is the famous “Seinfeld reunion” season. As I was watching it, I thought, “How does this premise even work? Larry David lives in California, but the other actors live in New York. Wouldn’t it be hard to get together to chat?”

And then it struck me, hard: Seinfeld was never filmed in New York. The actors can easily get together in California because they live there and the show was filmed there. On a studio lot. Like everything else.

While I can chalk part of this up to me being incredibly naive, I have to at least give partial credit to Seinfeld for providing such a specific sense of place. It really feels like New York (at least, it feels like what I perceive New York to be, which is probably nothing like New York).

This is right up there for me with revelations regarding Santa, the Easter Bunny, and the Tooth Fairy. I will forever remember the time that, at 37 years old, I realized that Seinfeld was filmed in a television studio, not in New York.

Has this ever happened to you?

This entry was posted on Wednesday, January 10th, 2018 at 10:47 pm and is filed under television and tagged with television. You can follow any responses to this entry through the RSS 2.0 feed.