Top 10 Tabletop Games from My Childhood 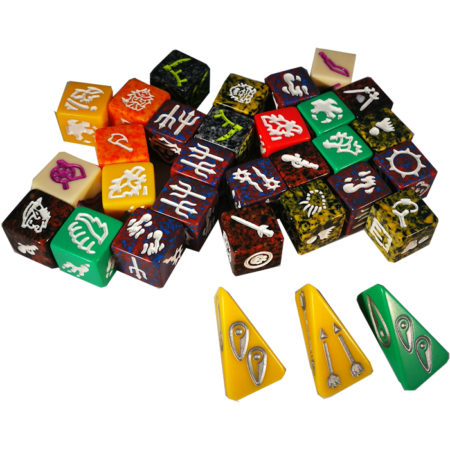 Today I was filming a game design video about Stratego, and as I waxed poetic about how good this ancient game is, I realized: Some of the games from my childhood were really, really good.

So I decided to put together a list of those games, ranked as a top 10. I’m pretty sure this is comprehensive, but I may have missed something. I’m 37, so I’m viewing my childhood as years 1-15.

10. Monopoly: Okay, yes, now I realize that Monopoly isn’t the finest game design. But we had a lot of fun with it! The thing about Monopoly that some people may overlook is that it’s a rare game where some of the best things happen when it’s not your turn (but are the results of previous decisions you made), keeping you engaged throughout.

9. Dragon Dice: In an era when components really weren’t all that great, Dragon Dice was the polar opposite. Even by today’s standards, the dice in this game were beautiful. They’re a joy to roll. I love the idea of building your faction–each one feels a little different.

8. Chess: I remember playing a lot of chess when I was 9, 10, 11 years old, thinking I was pretty good at it. Then I went to summer camp and played against someone who actually was really good at it. I still had a lot of fun playing chess, though.

7. Mille Borne: We played this French card game as a family all the time. It’s simple, but it still features quite a few interesting decisions.

5. Labyrinth: Labyrinth is such an elegant game. You’re trying to create a path out of a maze, and you do this by sliding tiles into the maze, altering the paths for you and your opponents. I really need to play this again as an adult to see if it’s as good as I remember.

4. Risk: I discovered Risk in my teens, and we played it quite often. My favorite part was the initial setup when anything seemed possible.

3: Magic: I played Magic casually–and mostly multiplayer, which seems weird in hindsight–for a few years in my early teens. I had very little concept of what made a good card or deck, but we still had a lot of fun with it.

2: Stratego: I had a good win streak of Stratego that lasted many years. I love how clever and mischievous you feel in this game, especially during setup.

1. Scotland Yard: This hidden-movement game is at the top of the list because when I brought it home from Christmas a few years ago, it jumped onto my all-time favorite games list and has stayed there ever since. It’s simply a blast to play.

What are some of your favorite childhood games? Do any of them still hold up?

This entry was posted on Tuesday, March 13th, 2018 at 9:49 pm and is filed under favorites and tagged with board game, favorites. You can follow any responses to this entry through the RSS 2.0 feed.

7 Responses to “Top 10 Tabletop Games from My Childhood”

Leave a Reply to Dorothy Semenow