What Animal Would You Least Want to Find in Your House?

Last night I was reading in bed before going to sleep. Walter was in his usual spot by the pillow, purring happily and drooling on the pillow. Here’s what he looks like when he does this: 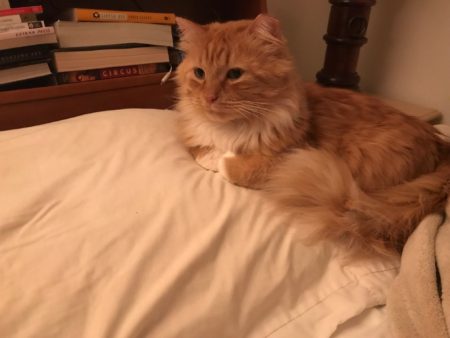 All of a sudden, he stopped purring, leapt to his feet, and sprang towards the bedroom door. Something was wrong.

This thought crossed my mind as I put down the book: “Is something–or someone–in the house?”

I walked out into the hallway to find both Walter and Biddy growling at the front door. At first I couldn’t tell why they were growling, but after about 5 seconds the footsteps they had heard from all the way down the hall of my building grew audible to my human ears, and they went quiet after the person entered their unit. Problem solved.

As Walter eventually reclaimed his spot by the pillow, I was pleased that I had such an alert home security system. I was also curious how Walter would have dealt with an animal making its way into my condo. Here are a few possibilities:

Of animals who could reasonably make their way into my house, a snake is the one I’d least like to see. I’ve heard that cats can hold their own against snakes, though I wouldn’t want to put my boys in that position. I’m not sure what I would do. I’ve done unexpectedly parental things to protect Biddy and Walter from hornets and spiders, but a snake…that’s out of my league.

This entry was posted on Tuesday, March 6th, 2018 at 9:09 pm and is filed under Uncategorized. You can follow any responses to this entry through the RSS 2.0 feed.

6 Responses to “What Animal Would You Least Want to Find in Your House?”

Leave a Reply to RodeoClown