Why Don’t Hotels Have Prominent Staircases? 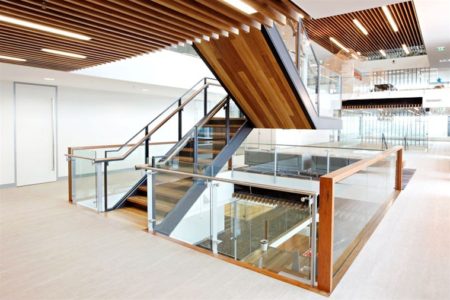 Today I went to the doctor for a checkup. The office had moved to a new building, and as I entered it, I was greeted with a beautiful sight: A wide, carpeted staircase right next to the elevator.

You see, I love taking the stairs. It’s exercise, it’s often faster than taking the elevator, and I feel free on the stairs. Also, I know that not everyone can physically walk up and down stairs, so I don’t want to take it for granted.

It’s a rarity to see such a prominent staircase in an office building. Even in the building where I live, the elevator is front and center, and the staircase is tucked away like an afterthought.

But the biggest places I’m always surprised to see a lack of prominent staircases are hotels. I go to a big gaming convention in Indianapolis each year, and I’ve stayed in three different hotels. In all three, I’ve had to hunt down the staircases to get some exercise–they’re always concealed, and you feel like you’re sealed in a concrete chamber when you go up and down.

I understand that stairs aren’t for everyone, but at these conventions, the elevators get REALLY crowded at peak times. Sometimes they take a long time to show up at all, and when they do, they’re full. I bet there are a number of people who would choose to take the stairs during those times if they were easier to find.

So why is this? Is it architecturally difficult to put a staircase next to an elevator? Is there a logistical reason why hotels and office buildings don’t do this more often?

This entry was posted on Thursday, March 8th, 2018 at 9:58 pm and is filed under question of the day. You can follow any responses to this entry through the RSS 2.0 feed.

9 Responses to “Why Don’t Hotels Have Prominent Staircases?”

Leave a Reply to Nik