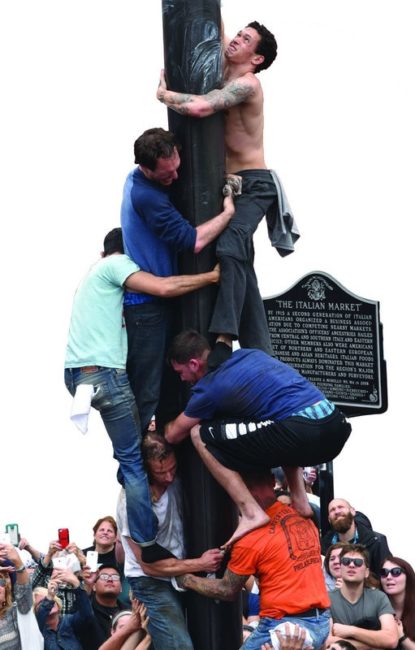 Today an article about the NCAA Men’s Basketball Championship game between Villanova and Michigan caught my eye. The headline read, “Villanova greases poles ahead of title game.”

I thought that sounded odd, but I also had a sense of deja vu. It hit me: Authorities in Philadelphia also greased poles before the most recent Super Bowl, as they were worried about people getting injured by climbing streetlamps and electric poles.

I wondered if there was a connection, so I Googled, “Where is Villanova?” Sure enough, the school is just outside Philadelphia.

This begs the question: What the heck is up with people from Philadelphia climbing poles?

I’m sure it’s one of those things where a few people make the entire city look bad, and they’re not representative of the overall population. But if it wasn’t a legitimate issue, police wouldn’t bother greasing the poles. I’ve visited Philly a few times, and I was never compelled to climb a pole.

It’s fascinating that the issue is so specific to Philadelphia. Other cities have poles too, but I’ve never heard of celebratory pole climbing becoming such a big issue elsewhere that large numbers of people climbed and fell off poles.

This is such an odd phenomenon that there must be some kind of an explanation. Do you know?

This entry was posted on Monday, April 2nd, 2018 at 8:21 pm and is filed under sports and tagged with sports. You can follow any responses to this entry through the RSS 2.0 feed.

8 Responses to “Have You Ever Climbed a Pole in Philadelphia?”