My Thoughts on Infinity War

I may get into spoilers at some point in this post, but I’ll make it VERY clear when I get to that part. Until then, you’re safe to read this.

Long story short, I was super excited about the Infinity War movie, and it exceeded my expectations. If you haven’t seen it, and you’ve enjoyed other Marvel movies, it’s a must-see film.

It’s a rare movie that I may need to see in the theater again, partly for the sheer spectacle of it, and partly because my viewing experience was quite subpar. I watched it from the balcony of the Moolah theater, my go-to theater for big movies like this, and the both the audio and the visual aspects were terrible. They left two huge lights on for the entire movie (I thought it was a mistake and reported it about 10 minutes into the movie, but they said they now leave them on for safety reasons), and I literally couldn’t hear half the dialogue in the movie due to the volume (which I thought might just be the sound mixing, but a friend saw the movie at another theater and said the dialogue was perfectly clear).

Anyway, despite all that, I found the movie to be immensely entertaining. There are so many memorable moments in the film–entrances, exits, action scenes, funny lines, etc. I’m amazed that the directors and writers integrated so many different characters into the movie and still managed to make it feel like a cohesive whole.

SPOILERS BELOW THE IMAGE 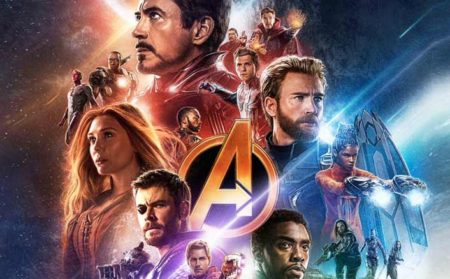 I loved that the movie was largely about Thanos. It’s a heist movie from the perspective of the bad guy, and he’s riveting from start to finish. I was worried about the CGI required for Thanos, but Marvel pulled it off perfectly.

One of the biggest surprises to me was how interesting and powerful Thanos’ teammates were. Sure, there are generic hordes of faceless bad guys that Marvel seems to think are obligatory for an Avengers movie, but the best fight scenes are between individual characters. It was really cool how several of them had their roots in a previews Marvel movie (the dark elf, Skrull, etc).

I went into the movie suspecting that several characters would die and Thanos would win (maybe not complete the Infinity Gauntlet, but win). After all, we already knew this was Part 1 of 2. I didn’t necessarily think Marvel would wipe out half of all living life, though, along with many heroes. I’m sure they’re not truly dead, but it seems like a good move to reduce the number of characters to juggle for at least the first third of Part 2 (and a little bit of room to introduce new characters).

What did you think of the movie? Do you have any theories about what happened or what will happen?

This entry was posted on Sunday, April 29th, 2018 at 6:00 pm and is filed under movies and tagged with movies. You can follow any responses to this entry through the RSS 2.0 feed.

13 Responses to “My Thoughts on Infinity War”