I’ve been designing a cooperative game for a while now, and it occurred to me–particularly after discovering a podcast entirely focused on cooperative games–that I should make a Top 10 list specifically for this genre of games.

By “cooperative game,” I’m referring to any game where all players are working together to win or lose. One-versus-many games and team games don’t count, nor did I include semi-cooperative games (where it’s possible for some players to win and not others), though I did consider cooperative games with traitors.

9. The Captain Is Dead: I’ve only played this once, but I had so much fun with the theme and the tension of surviving on a spaceship.

8. Pandemic Legacy: I’m often hesitant to put campaign games on lists like these, as my main filter is, “What would I rather play today?” But Pandemic Legacy had a big impact on me as a designer, and I really admire the design choices in the sequel.

7. Legendary Encounters Alien: This is a game that completely surprised me by how much fun it is. I love how it lets you help other players and the sense of dread it creates by not letting you see creatures that are sneaking up on you.

6. Harry Potter Hogwarts Battle: I love cooperative games where you play, lose, and immediately want to play again. In fact, I don’t think I’ve ever played a game of this where I didn’t immediately play again. I’ve also never won. 🙂 I’ve only played Game 7, but I like that you could start at Game 1 and ramp up in complexity.

5. Burgle Bros: I love heist movies, and this game perfectly captures that theme. I prefer playing the 2-level version.

[UPDATE: For some reason I completely forgot Summit, probably because it’s both a competitive and a cooperative game. I love the cooperative version, and if I had remembered it, it probably would have gone here on the list.]

4. Forbidden Desert: This was a really tight call compared to Burgle Bros, as they have a number of similarities. I really like the satisfaction of clearing sand off tiles so you can move through them. 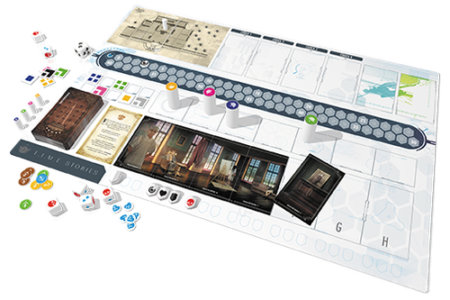 3. Mysterium: This is such a brilliant concept: One player is a ghost, and they’re trying to use visuals (cards) to convey to the other players how they were killed. Kind of morbid, but it’s a delightful game that is super easy to teach and return to.

[UPDATE: Jeff’s comment made me remember Orleans: Invasion, a cooperative expansion to a non-cooperative game. It’s fantastic, and it would probably be around #3 on this list if I had remembered it.]

2. Flip Ships: A dexterity challenge seems like the perfect fit for a cooperative game, as it gives even the most skilled players the chance to horribly (and memorably) fail and even the newest players a chance to have epic moments.

What are your favorite cooperative games?

This entry was posted on Thursday, April 12th, 2018 at 8:04 pm and is filed under favorites and tagged with board game, favorites. You can follow any responses to this entry through the RSS 2.0 feed.