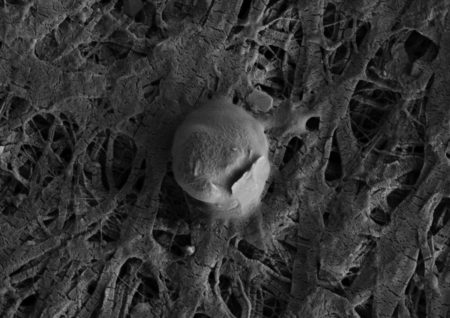 Today everyone seems to be talking about the newly discovered bacteria (technically, it was discovered a while ago, but the findings weren’t published until today). The term “time-traveling bacteria” is being thrown around, which sounds awesome, but I have my hesitations. More on that in a second.

The various articles I’ve read all point to an article in the latest publication of Methods in Enzymology. Apparently, a few scientists in Cambridge have been testing a type of bacteria commonly found in giant tube worms (Riftia pachyptila), an invertebrate that’s able to survive literally on the ocean floor.

In their study, the bacteria–which they’ve named P. Chronococcus–was isolated so the researchers could learn more about the extremely fast growth rate of the tube worms. Basically, they would inject it with a colored dye and watch it grow.

This is where something weird happened. I tried to read the original article, but only the summary was available online, so I hope I get this right: As expected, the bacteria grew at a really rapid pace. But when scientists recorded and viewed this process at much slower rate, they realized that every few milliseconds, the bacteria would disappear and reappear much, much bigger. Like, thousands of times bigger.

I don’t quite understand how they did this next part, but they injected what the journal called a “cellular clock” into the bacteria. This is where things get crazy. Whenever the bacteria disappeared and reappeared, the “clock” would indicate a significant jump in age. Like, if a bacteria was 10 seconds in age when it disappeared, when it reappeared, it would be 25 days old (that’s a random example–the age difference seemed to vary quite a bit).

I’ve probably recapped too much of the scientific mumbo jumbo, so I’ll cut to the chase: The scientists are 99% confident that the bacteria is time traveling. They don’t know if it’s going to the past or future or where it’s going when it disappears, but they definitely know it’s not here (the present moment) and they know it’s the same bacteria–just a much older version–that returns.

The implications for this are very much in the realm of science fiction, and we’re talking about microscopic bacteria here, but the really cool thing here is that the bacteria seem to be able to carry things–the colored dye and the cellular clock–with them as they “time traveled” (again, I use that term with hesitation, but that’s what the scientists were saying).

The scientists are already pursuing the next step, decoding the DNA from P. Chronococcus. The next few steps are purely hypothetical, but they mentioned trying to inject bigger things into the bacteria, both non-biological and biological. There’s talk of breeding a strain of fruit flies with the Chronococcus DNA.

Personally, I’m really excited about this. I don’t see how it’s possible to travel back in time from the present, but traveling forward in time and then back again doesn’t seem to violate any laws of physics. I just always thought it would be the result of some massive piece of human-made technology, not a tiny speck of bacteria.

We’ll see where this goes! What do you think? Would you ingest time-traveling bacteria? If they were somehow about to significantly increase the seize of the bacteria and control when it goes, would you get inside of it?

This entry was posted on Sunday, April 1st, 2018 at 5:49 pm and is filed under fake article, Newsflash. You can follow any responses to this entry through the RSS 2.0 feed.

9 Responses to “What Are Your Thoughts on the Newly Discovered Bacteria?”