What Did You Think of “A Quiet Place”? 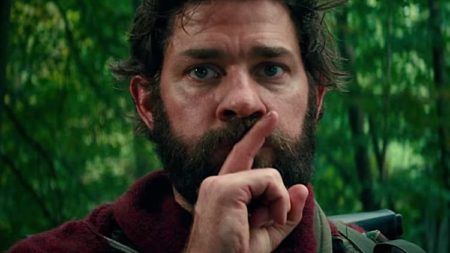 It’s exceptionally rare that I watch a scary movie. But after skipping Get Out in the theater last year and later regretting after I watched it at home, I decided not to make the same mistake twice.

A Quiet Place doesn’t really have anything to do with Get Out–they’re two completely different movies. But both have near-perfect ratings on Rotten Tomatoes, both have a twist on their core genre, and both have a compelling inspiration.

The twist in A Quiet Place (this is the entire hook of the movie–it’s not a spoiler unless you don’t want to know anything about it) is that the main characters are in incredible danger if they make a sound. And not just today–this is their entire life. If they make noise, they will die.

That, in itself, creates a really interesting platform to explore how the characters avoid making sounds. It’s also fascinating to see how director John Krasinski (Jim from The Office) incorporates the element of sound into the film. There’s hardly any dialogue, and there are extended scenes with only the faintest sound, not even any music. The theater was dead quiet.

In addition to that hook, the inspiration for the movie really drew me in. Krasinski made the movie because he was drawn to the idea of seeing how far a parent would go to protect their kids. That resonates with me, both as a son and a “father” to two cats. I’ve seen this done in some other movies (and The Walking Dead) where the approach is to make the parent heartless for anyone except for their kid. Krasinski takes a different approach due to the unique circumstances of the world A Quiet Place is set in, and I really love the little touches he added throughout.

Oh, and as an added bonus, I just learned that Krasinski cast a deaf actress as the daughter in the movie (who plays a deaf character). That’s awesome.

A testament to the impact of this movie is that hours after seeing it, I’m still acutely aware of how much noise I’m making as I walk around and even type this blog entry. What did you think of it?

This entry was posted on Sunday, April 8th, 2018 at 7:29 pm and is filed under movies and tagged with movies. You can follow any responses to this entry through the RSS 2.0 feed.

9 Responses to “What Did You Think of “A Quiet Place”?”