What Was the Last Author Reading You Attended? 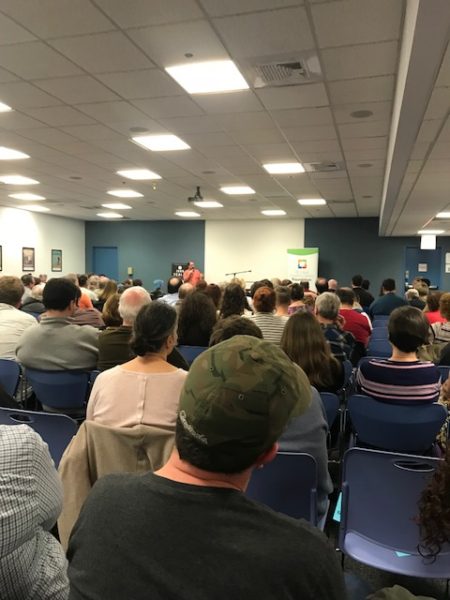 Tonight I had the good fortune of attending a reading by one of the most highly acclaimed sci-fi authors in the business right now, John Scalzi, at the St. Louis County Library. He’s most known for Old Man’s War, but he’s written a lot of other fantastic books. I’ve read all but one or two of them.

I showed up alone, not knowing what to expect in terms of attendance. A handful of people? A throng? The photo has already spoiled the answer for you: There were around 200 people.

Scalzi is an excellent, experienced speaker, and he didn’t disappoint. He also did something I really appreciate: He figured most of us there were aware of his work and had probably either already bought his new book (Head On, released last week) or that we were going to buy it at the event. So instead of reading from Head On, he read the first chapter of a novel he’s currently writing, as well as two unreleased short stories.

It was like being in on a secret, and it was brilliant. Why don’t other authors do this? (It also makes me wonder why authors even do book tours anymore if most of the people who attend already have the book or are going to buy it, but that’s another topic.)

My experience at the event wasn’t entirely pleasant, though. Before I say this, I want to note that nerds and geeks are my people. I make board games for a living, after all. I am a nerd and a geek myself.

So, a mixed bag of an evening, but overall, it was really cool to listen to one of my favorite sci-fi writers in person.

What was the last author reading you attended? How was your experience?

This entry was posted on Monday, April 23rd, 2018 at 10:33 pm and is filed under books and tagged with books. You can follow any responses to this entry through the RSS 2.0 feed.

3 Responses to “What Was the Last Author Reading You Attended?”

Leave a Reply to Helen