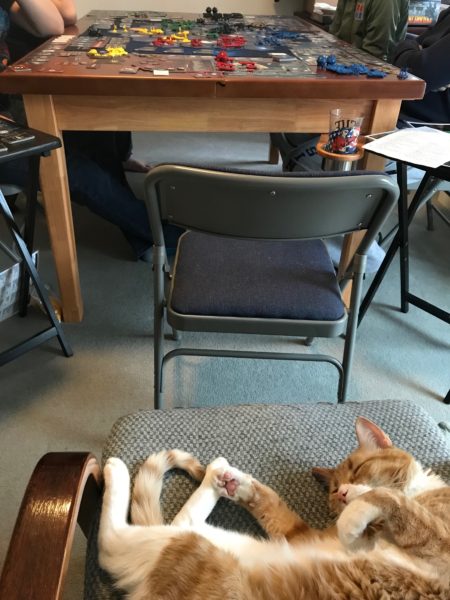 I know, I just posted a board game article on this blog last week. But I promise this entry applies to all types of games: tabletop games, roleplaying games, sports, video games, The Hunger Games, etc–any type of competition.

Some games are simply longer than others. For example, soccer is typically a 90-minute game. A game of baseball can easily be twice that.

While I don’t hear many people saying they wish certain types of sports lasted even longer than they already are, I’ve often heard video games reviewed based on how many hours of gameplay they offer. That’s part of their value proposition.

My forte, of course, is the world of tabletop games. I’ve found that I start to disengage in most games after 2 or 2.5 hours. 3 is really my max.

I have, however, ventured outside of that range a few times, playing games that I see as a necessity for me to experience as a designer. Eclipse took us over 5 hours, A Game of Thrones lasted almost 6 hours, and Star Wars: Rebellion has taken me over 4 hours to play (and it’s a 2-player game!).

There’s one highly acclaimed game that’s famously long. It’s the game many people point to when they talk about “epic” games, and the length plays a role in the description. The game is Twilight Imperium, and I played it for the first time today.

My understanding of Twilight Imperium is that a short game lasts around 3-4 hours, a typical game somewhere in the 5-8 range, with some games tipping the scales at 10-12 hours. In fact, a friend of mine played a 13-hour game of it!

In the end, though, we finished right at the 5-hour mark, so it wasn’t even the longest game I’ve ever played.

What about you–what’s the longest game of any kind that you’ve played? Does length enhance or detract from the experience for you?

This entry was posted on Sunday, April 15th, 2018 at 10:49 pm and is filed under Uncategorized and tagged with board game. You can follow any responses to this entry through the RSS 2.0 feed.

12 Responses to “What’s the Longest Game You’ve Ever Played?”