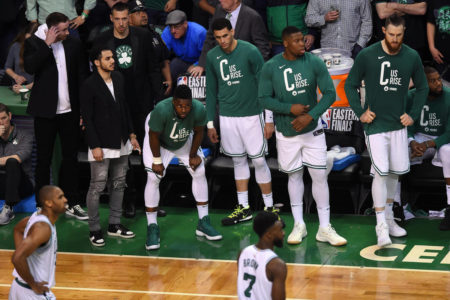 While I’m not a huge NBA basketball fan, I enjoy the drama of the playoffs, and I’ve tuned into the final few minutes of a number of recent games. When I did that for Game 7 of Cavaliers-Celtics a few days ago, I was genuinely surprised by something the announcers mentioned.

Kyrie Irving, the injured star of the Celtics, wasn’t at the game. A home game.

The announcers highlighted it because Irving had provided leadership from the bench at a number of other playoff games for the Celtics. Yet here it was, Game 7, the conference finals, and he was nowhere to be seen.

As it turns out, he was recovering from surgery earlier that day for a deviated septum. It’s likely he scheduled the surgery long before he knew it would fall on the date of Game 7. The Celtics made an improbably run through the playoffs after all.

I also understand that it must be really frustrating to sit on the bench nursing an injury while your teammates compete. You can’t really do anything tangible from the bench, other than provide moral support and maybe some coach-level observations.

But still…I don’t get it. Game 7! At home! How do you not reschedule non-urgent surgery to be there for your teammates? Isn’t that what being a team player is all about? If I were involved with the Celtics, I would be disappointed.

Of course, I’ve never been in that position, so it’s hard for me to say what I would do. I’m sure it’s MUCH easier said than done. I was injured for parts of a few of my high school soccer seasons, and I honestly can’t remember if I watched the games anyway. I’m pretty sure I did. But that’s a very different level than playoffs of a professional sport.

How would you support your team if you were injured? Do you have any expectations of injured players in situations like these?

This entry was posted on Tuesday, May 29th, 2018 at 9:57 pm and is filed under sports and tagged with sports. You can follow any responses to this entry through the RSS 2.0 feed.

3 Responses to “How Would You Support Your Team If You Were Injured?”

Leave a Reply to Sarah