I just finished watching the final episode of Survivor 36 with a few friends, 2 dogs, and 1 cat (the other cat wasn’t interested). Spoilers follow. Here’s a dog photo to separate non-spoiler and spoiler content: 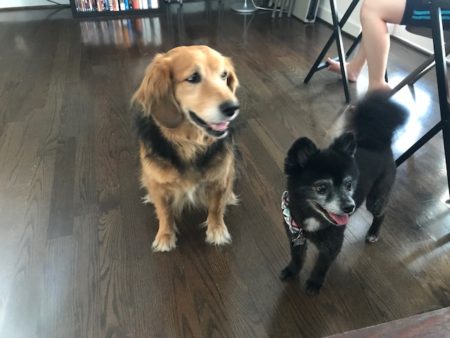 So, two big, memorable things happened in this episode. Well, two and one thing that didn’t happen.

First, Dominic was in a really tight spot in the first tribal council. Basically, he knew that he was going to get the most votes, and he only had one immunity idol. He wanted to save that idol for the next tribal council. So he made a big show about another idol (which only he knew was fake) to move the votes off him. And it worked! He preserved his idol. It was a massive bluff.

Second, Survivor does this really neat thing now where when they get down to the final 4 people, the person who wins immunity selects one person to join them in the final tribal council, and the other two compete in a firemaking challenge. So the person who wins immunity has a huge choice to make. Dominic won it, and he almost–so close–chose to give away his immunity and compete in the challenge as a way to ensure that his biggest competitor would be ousted. However, in the end he chose to retain the idol.

Third, in a Survivor first, the final vote was a tie. A tie! Because there are three final contestants, the tie is broken by whomever isn’t a part of the tie (there are 10 votes cast). While it wasn’t super climactic after that, as the tiebreaker was clearly allied with Wendell (a worthy winner), it was still awesome to see something new happen in the 36th season of a show.

Survivor remains one of my favorite shows on television, and I can’t wait for next season. If you watch it, what did you think about the finale?

This entry was posted on Thursday, May 24th, 2018 at 9:21 pm and is filed under Survivor, television. You can follow any responses to this entry through the RSS 2.0 feed.

5 Responses to “Two Memorable Moments from the Survivor Finale”