Which Comedian and Which Car? 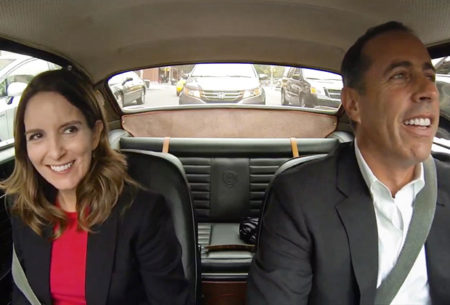 If you were to drive around in any car ever invented for a few hours with a famous comedian, which car and which comedian would you choose?

This is essentially the question Jerry Seinfeld gets to answer whenever he films an episode of Comedians in Cars Getting Coffee. I like that he took a few of his favorite things and mashed them together into a TV show.

After watching a few episodes tonight, my mind wandered to whom I would choose to hang out with for a few hours and in which car. Here are my thoughts:

Comedian: There are many, many people who make me laugh as part of their job. But if I simply want to be entertained, I’ll watch them perform on TV, in a movie, or live. I’m going to drive around with this person for a few hours, so I think I’d prefer to choose someone who has displayed a natural sense of curiosity whenever they appear on talk shows. Someone like Will Ferrell, Vince Vaughn, Patton Oswalt, Tina Fey, Ellie Kemper, or Jerry Seinfeld himself.

Car: My first instinct is a Tesla. I’m fascinated by Teslas (and self-driving cars in general). Though I’m a little hesitant to choose that as my car, because there’s a very good chance I’ll get to ride in a Teslas someday, which there’s very little chance I’ll get to drive in some of the old, classic cars that Seinfeld procures for the show. Though, honestly, the more I think about it, the more I just have to admit that I’m more interested in the future of cars than the past. So I’d want to try a car that hasn’t even been released yet (and that has a self-driving feature).

What’s your pick for a comedian and a car?

This entry was posted on Tuesday, June 5th, 2018 at 8:34 pm and is filed under television and tagged with television. You can follow any responses to this entry through the RSS 2.0 feed.

9 Responses to “Which Comedian and Which Car?”

Leave a Reply to jameystegmaier