Have You Seen the Movie “Game Night”? 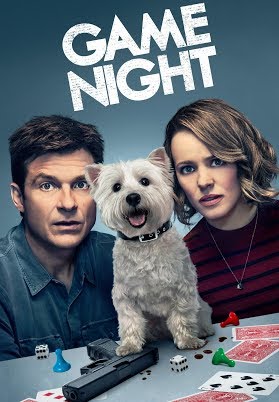 Despite all of the things that can go wrong when I watch a movie in the theater, sometimes after watching a movie at home, I wish I could have seen it with an audience. Game Night is one of those movies.

I watched Game Night on DVD during dinner yesterday and today, and I loved it. It may be the best dark comedy I’ve ever seen (unless There’s Something About Mary counts as a dark comedy. That’s one of my favorites).

It’s funny throughout, it keeps you guessing, it’s self-referential, it has a number of callback jokes that are set up early in the film, and it features tons of dramatic irony (I think that’s the term for when the audience knows something the characters do not). Oh, and the credits are amazing, right up there with the 22 Jump Street credits.

I heard it was good when it was released, and I have no excuse for not seeing it then. As much fun as I had watching it at home (despite Biddy not getting any of the jokes), it would have been even more amazing laughing together with other people.

I felt the same way after watching Get Out on DVD. Getting scared with a bunch of people is just as good (fortunately, I did see A Quiet Place in the theater, which was awesome).

Have you ever regretted not seeing a movie in the theater? And if you’ve seen Game Night, what did you think?

This entry was posted on Thursday, July 12th, 2018 at 8:13 pm and is filed under movies and tagged with movies. You can follow any responses to this entry through the RSS 2.0 feed.

6 Responses to “Have You Seen the Movie “Game Night”?”