My Greatest Fear #62: Thunder and Lightning

I readily admit that most of my “greatest fears” are irrational and outlandish, like potato eyes, left turns, and face paint. Today’s fear is probably a bit more common, though you might react very differently to it than I do.

Ever since I was a kid, I’ve really not liked thunderstorms. Part of it is my fear of lightning. But I also really don’t like loud noises, which just happens to be thunder’s specialty.

Last night, a tremendous thunderstorm swept through St. Louis. Rain was pelting down outside my window as I played on the computer, and I could hear thunder in the distance.

You know how usually you see lightning and then, a few seconds later, the thunder follows? The lightning serves as a warning. Well, there was a particular bolt of lightning that was accompanied simultaneously by thunder. It was that close to my building, and my reaction was to sprint as far away from the window as possible.

Think about that for a second. My fear of thunder is so ingrained in me that my subconsciousness thought my legs were fast enough to beat thunder in a footrace. I was a sprinter back in the day, but even I am not that fast.

I’m not ashamed (okay, perhaps a little) to admit that I ended up spending a few minutes huddled in a back room with my cats while the storm passed. Here’s a photo I took of me and Walter during that time. I really don’t like thunder. 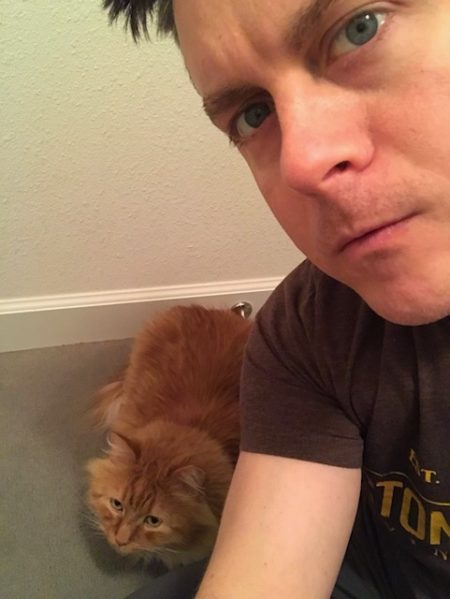 How do you feel about thunder/lightning? Have your reflexes ever taken over and resulted in an odd reaction to a fear?

This entry was posted on Sunday, July 15th, 2018 at 8:46 pm and is filed under My Greatest Fear, superlatives and tagged with greatest fear, superlatives. You can follow any responses to this entry through the RSS 2.0 feed.

12 Responses to “My Greatest Fear #62: Thunder and Lightning”

Leave a Reply to CanIBeBlue