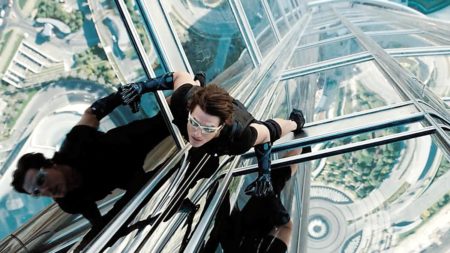 I wrote about Mission Impossible: Fallout last week before I saw it, through the lens of a question of whether or not actors should perform their own stunts. Normally I wouldn’t revisit the same topic so soon, but I really enjoyed the movie, hence this post.

Before I get into spoilers, here’s my quick review: I found the movie to be thrilling and highly entertaining on multiple levels. The action is spectacular, the twists and turns are fantastic (there are a few great reveals I didn’t see coming), and the human-level moments ground the movie in a way that truly makes me care for and worry about the characters.

I’m going to talk about specific set pieces below, though before I do, I wanted to talk about them in general for a minute. A set piece in a movie is a scene built around…well, essentially around a gimmick. Like, in the first MI movie, Ethan Hunt is lowered down from the ceiling in a highly secure room at Langley to steal some information from a computer.

I think I’ve undervalued the importance of setpieces until now. I’ve certainly enjoyed them, but I’ve lumped them in with all the other scenes of the movie. However, I’ve now come to appreciate them because I’ve realized how important they are for creating memorable moments (something I also try to do with my games). I may be entertained by Tom Cruise running and driving around in Rogue Nation, but the scene I remember is the one where he climbs up the side of the really tall building. It gives my memory an anchor point.

Even if you don’t read the following, what do you think about set pieces? Do you have a favorite?

Part of what makes Mission Impossible: Fallout great is that there are several standout set pieces. Here are my favorites in order:

Also, while these weren’t set pieces, I really liked the twists in the early scene with the guy who thought the bombs went off and the later scene where Cavill doesn’t realize that it’s Benji, not Lane, in the room with him.

What was your favorite set piece in Fallout?

This entry was posted on Monday, July 30th, 2018 at 10:55 pm and is filed under movies and tagged with movies. You can follow any responses to this entry through the RSS 2.0 feed.