World Cup Update: Are You Not Entertained?! 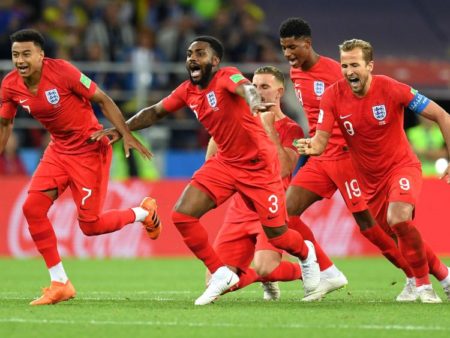 Okay, maybe you don’t care about soccer and truly aren’t entertained by the World Cup. But I am! Here’s an update with my current thoughts:

We’re entering the quarterfinals with several predictable entrants (France, Uruguay, Brazil, Belgium) and an entire half-bracket that hardly anyone expected to get this far (Russia, Croatia, Sweden, England). This is awesome! It means that the semis are certain to feature two of the unexpected teams, and the final match will feature one of them. While I’m not rooting for Russia, it’s pretty cool to see such a low-ranked host country make it this far.

I love seeing how each match has a completely different feel to it. Japan/Belgium featured swingy, back-and-forth play, with each team going full-speed forward almost the entire game. Today, there were almost no fouls or flops for the entire first 20 minutes of the Switzerland-Sweden game…later juxtaposed by Colombia seemingly fouling every few minutes (some called, some not).

I’ve noticed that the announcers love to say that there’s “nothing the keeper could do” almost every time a goal is scored against them. It’s perhaps the most overused and inaccurate phrase they use, because there’s almost always something a keeper can do: They can position themselves better before the shot, they can react quicker, they can more precisely direct their defense, etc. Yes, being a goalie against the world’s elite players is difficult, but there’s usually something they could have done.

Also, I continue to be a little baffled by how coaches use substitutions. Each team is allowed 3 substitutions for the first 90 minutes, and if a team is up by a goal or more, they rarely make any subs until the 85th minute as a way of wasting time. I get that strategy, and I also understand the importance of holding on to a sub or two in case someone gets hurt. But these teams are stacked with the best players in their country, and it’s human to get tired after sprinting for 8 kilometers. Why don’t more coaches make one strategic sub–offensive or defensive–at the 60-minute mark? I can’t imagine that the difference between most starters and their equivalents on the bench is that big, but I can imagine that a tired player isn’t going to be nearly as effective as a set of fresh legs. What do you think?

Last, here are my picks (some driven by hope, others by reality) for the rest of the tournament:

I’m curious to hear any thoughts, predictions, or favorite moments you’ve had from the World Cup so far.

This entry was posted on Tuesday, July 3rd, 2018 at 8:48 pm and is filed under sports. You can follow any responses to this entry through the RSS 2.0 feed.

4 Responses to “World Cup Update: Are You Not Entertained?!”