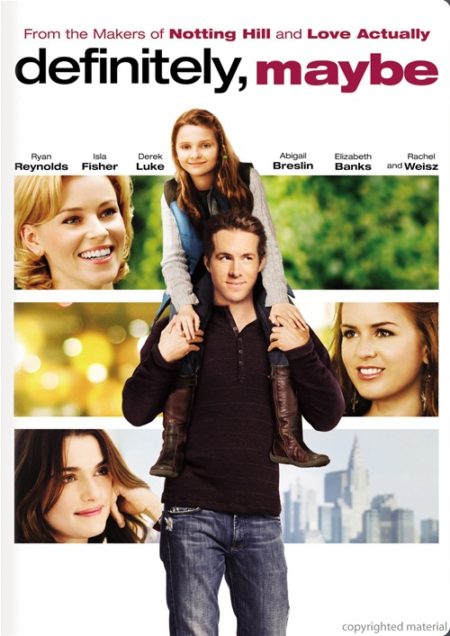 I love a good romantic comedy. It’s one of my favorite film genres, even to the point that I’ve written a script. When they’re done well–that is, characters do things that make sense, they’re not filled with tropes, and there is both heartwarming romance and laugh-out-loud comedy–they make me incredibly happy.

After discussing some favorite rom coms with friends the other day, I decided to make my own top 10 list. As I did, I realized that I needed a key construct to help me define a romantic comedy, and I stumbled upon it in this old blog entry: In addition to making me laugh, a rom com must make me want to fall in love or appreciate the love I have. That’s the separating factor between many of the honorable mentions and those in the top 10 list.

10. Friends With Benefits: This is one of two similarly themed movies that came out at the same time, and I’m pretty sure this is the one I liked more.

9. When We First Met: One of several movies on the list with a time travel hook and a great twist.

8. The Proposal: I was quite surprised by how much I enjoyed this Ryan Reynolds/Sandra Bullock film.

7. What’s Your Number?: This was another big surprise. It’s funny, it’s sweet, it’s sexy, and it’s fun to watch Chris Evans and Anna Faris have a good time together.

6. My Big Fat Greek Wedding: This teeters on the edge of more comedy than romance, but in the end, it just works.

5. Notting Hill: Hugh Grant and Julia Roberts, plus a hilarious supporting cast? There are a few tropes in this one, but the comedy holds it together.

4. You’ve Got Mail: I really need to rewatch this to confirm that it belongs, but I felt that Tom Hanks and Meg Ryan needed to be on the list somewhere. I don’t think Sleepless in Seattle holds up to dissection, but I’m pretty sure this one does.

3. Sleeping With Other People: There’s something very modern about this movie that pushes it onto the top of the list. It’s really good, and it’s on Netflix–check it out.

2. Groundhog Day: Does this belong on a romantic comedy list? Maybe not. But romance and comedy are central points of the movie, and I love it, so it’s here.

Listing these movies makes me want to watch all of them, and I haven’t seen several of them in years. That’s one of the great things about romantic comedies, in my opinion: There’s a certain level of comfort to them that I really enjoy.

What are your favorite romantic comedies?

PS. If you want to know why Love Actually isn’t on the list, I have reasons.

This entry was posted on Wednesday, September 19th, 2018 at 11:01 pm and is filed under favorites, movies and tagged with favorites, movies. You can follow any responses to this entry through the RSS 2.0 feed.